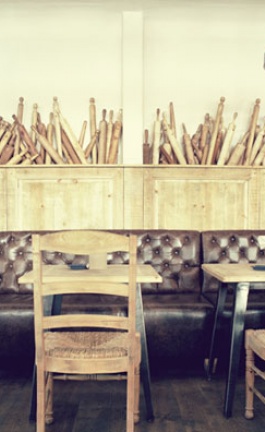 For this year’s Lively Architecture Festival (FAV) in Montpelier, 11 young architectural teams presented their spatial interactive installations responding to the theme of surprise. Their installations set in the stunning urban environments which featured in eleven hotels, made the city a true creative hub and offered the public a rare opportunity to discover the architectural scene’s brightest newcomers.

This year’s winner Julie Biron, an independent architect, practicing in Berlin presented the installation: NE DÉRANGEZ PAS MES CERCLES, a disk surface installation which invites the audience to enter the space and bring this static and solid surface to life. The participation of the viewer, who in this case moves across the stable, dense disks, makes the installation an experiential space.

Samuel Berthomeau and Lucie Mothes created ByeByeBallon, which aims at bringing together visitors around the same project. The silver balloons that float above the bases invite visitors to play around and intervene. It is a witty commentary that in essence allows visitors to influence the structure of the project through their presence and interaction with it.

Cyril Rheims and Mathieu Collos with their project Invitation à la levitation aimed at surprising viewers by intriguing their visual senses. The piled up boxes were covered with anamorphic pictures distorting the image and making the structure invisible.

Adam Scales, Pierre Berhelomeau and Paul Van Den Berg interpreted the theme of surprise as a way of exploring the visitor’s relationship to space. In doing so, they created Reframe which invites visitors to move across the cube while moving a series of ongoing changes whilst visual experiences unravel. According to the architects, each different spot around the cube animates and activates the existing surrounding architecture as the visitor moves around the project.

Javier Pena Ibanez and Cristina Sanchez Algarra of Tri-Oh!. created a series of boxes named Cité Surprise, Cité Surprenante which introduce visitors to all of Montpelier’s secret and forgotten places. Viewers become the protagonists as they are able to hide inside the cubes, which are transformed into kaleidoscopes that whisk them away  to all the secret city spots.

Similar to the previous project, the Tournaround installation by Erik Herrera Iturat, Cristina Bestraten del Pino and Aina Bigorra Gonzalez, aimed at surprising visitors by inviting them to their garden of flowers, which in essence is a game of perception.

The UrbanB team created Topographie de la Surprise, made out of lavender flowers, a material well grounded in southern France. As they consider surprise to be something natural, they sought to create something natural which can pleasantly surprise visitors’ senses.

In a much more conceptual tone, the architectural practice Le Bureau des Affaires Sceniques created an installation, which merges the gap between graphic design and architecture. And so with their project, Le renversement du ciel, they looked at surprising visitors both mentally and visually

Forêt urbaine by AA64 consists of a metallic structure where changes in light during the day alter the image of the space creating unexpected visual and spatial narratives.

Premiere Neige by Université Laval de Québec, is an installation that pays tribute to the natural feelings that a surprise gives us. It is an installation where snow is perceived as a source of pleasure and surprise is maintained each time snow transforms the landscape. Visitors  therefore become part of the installation and enjoy the contentment of a surprise.

Finally, Smooth Rock by MN-Lab is an installation that aims, according to the architects, to provoke and surprise classical architecture, again designed to surprise visitors’ senses.