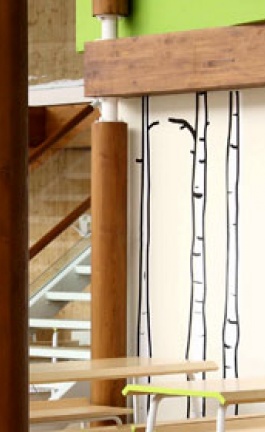 Most of us remember Bavarian Cuckoo clocks through the countless cartoons we watched as kids. We laughed at the Bavarian reference when Sylvester the Cat was hit with a hammer or choked by Spike the Bulldog to get Tweetie bird out through the infinite extension of Sylvester's tongue simulating the clock's essence. Others might have seen one perhaps at a family's dwelling (my grandmother had one). Although I could hardly remember all the intricacies of the Bavarian Cuckoo clock my grandmother had, I do remember the elaborate carved decorations that it had. I was always intrigued by the extensive hours it must have taken to make all this work and the treat to get to hear the melodies at each hour.

The cuckoo clock mostly describes a "traditional" style element that hangs from a wall and has a mechanism that opens a whistling of a bird (cuckoo) in intervals - at full hours on a eight day clock and both at full and half hours in one day clocks. This nearly lost craft can be taken as far as the second century BC, when the first one is credited to Greek mathematician, Ctesibius of Alexandria.

The first edition comes from a the talented Brooklynite, Dan Funderburgh. The traditional cuckoo clocks contained numerous references to animals and leaves. Dan referenced the craft's history and added decorative fleurons and a naturalistic layer to the pieces but enjoyed adding a twist by placing some illustrative dynamite attached to the clock. The combination of blackletter, decorative fleurons and illustrations create a contemporary take on this old craft once glorified in Black forest, Germany.  The illustrations are laser etched in birch with laser cut acrylic hands.

Here are the Neverend by Dan Funderburgh details:βÂ¨

Limited edition of 88 / 44 natural & 44 blackβÂ¨- Measure 16″ high x 9″ wide / These are HUGE!βÂ¨- Laser cut acylic hands are reversible, come in black and whiteβÂ¨- Solid birch body, handcrafted in CanadaβÂ¨- Battery operatedβÂ¨- Ships Globally
The clocks retail for $198 and can only be purchased through Furni’s Online Shop.
The Neverend series intends to keep going with a monthly take and Yatzer will stay on top of it to see this collaboration continue to flourish and amaze us with play and historic references. Kudos to Bobby and Dan.