The tennis mania of Hugh Hayden 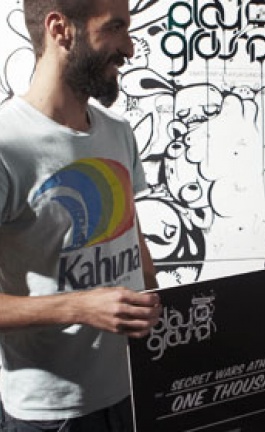 Nextdoor is a temporary interior design by The University of Amsterdam, for the Center of Amsterdam School of Entrepreneurship (CASE).  Following a new educational approach students with concentration on different fields of study are provided by the university to become young entrepreneurs and develop a business concept and market strategy with the support and assistance of the university.  Basically, CASE acts as an angel fund, (what is known as a venture capital) by providing the young entrepreneurs with the space!

A total area of 275 square meters was provided as office space by the university, but the renovation of the area was on a tight budget.  Studioquint and Jos Roodbol put their forces together to keep the project on a low budget and design 10 permanent work-units and 40 flexible work areas.  The work-units and the work areas have a similar design which at first sight seems as if Studioquint and Rood were inspired by Piet Mondrian (1872–1912) and his painting Composition II in Red, Blue, and Yellow, 1930.  The strict black lines and the square and parallelogram shapes make vivid reference to his paintings.  The colors used however, were the same except for the red.  The working units are very similar in design as with the repetition of Composition II, although each unit has minor differences.

Being on a tight budget, all the furniture and work units have been assembled by low cost standard door-elements.  Furthermore, the plaster board ceiling was removed but the structure was kept intact, giving a view of the exposed building structure, the wiring, and the air vents.  The specific programmatic conditions acted as the starting point to the spatial intervention of the area.  These factors were no other than the student; as every young entrepreneur has to develop their own business identity and at the same time all of them have to adjust to the complex economical network.

The composition of the working units are white cubes and the differentiation has been achieved by the addition of various interior design elements which are made by black plywood.  The black plywood elements are necessary as they provide storage spaces and stabilize the units as they introduce a new layer of scale.  The orientation of the work stations is placed in a long-drawn linear order, while the black plywood storage element appears to create a visual pattern and spatial zoning, seeming as if the other office is right // NEXTDOOR //.

The entire project stands out as a whole, a very unique structure.  The concept of the renovation was to stress the uniqueness and the individuality of each young entrepreneur’s new venture.  The programmatic conditions appear to be apprehended in the complex economical network of a new venture for the Center of Amsterdam School of Entrepreneurship.  The characteristics and the elements utilized in the successful and eloquent modern renovation of the space apart from the programmatic conditions seem to be the inspiring art of Piet Mondrian and the design forces of Studioquint and Jos Roodbol.