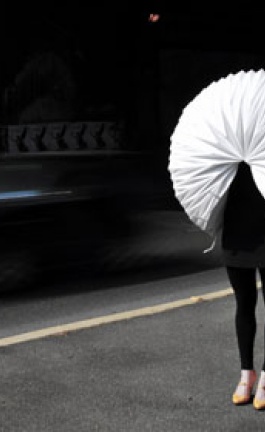 Is loneliness a higher state of mind? Do we all stand alone, despite the illusions of proximity and love? What would a stranger think if he spied us from a distant corner? We have the questions, but Riego van Wersch seems to have the answers as well. Riego is a 37 years old photographer that lives and works in Paris. His photos have a touch of calm sadness, as if something was about to happen and at he same time they stand still. Accidental encounters, small details that hide a story behind them, streets full of individuals that carry their personal drama, the power of space and architecture and their impact on human psychology, they all form part of Riego van Wersch’s unique universe.

Riego van Wersch tackled photography precociously at the age of 11 in an autodidactic way, exhibiting his work for the first time at the age of 17 in France. Graduate of the Gobelins at 24, he then became Director of Photography and since then combines perfectly personal work and international advertising campaigns. We at Yatzer have such a crush on his work that couldn’t help approaching him for an exclusive interview. The only thing that we can reveal is that we were left amazed. Join us!

Riego, how did your passion with photography start?
My passion for photography started when I was about 11 years old thanks to my parents’ camera, an old Russian LUBITEL 6X6. The appearance of the inverted image in the viewfinder gave it a surreal magic, a different vision of the same “reality”.

Some photos of you remind me of the melancholy found in the paintings of Edward Hopper. Is loneliness a higher state of consciousness?
For me, solitude is the only unconscious state of the human being and of our “living” companions. Non-solitude is a desired state of consciousness, which is unreal. We are born, live and die alone. We just believe we’re accompanied. Melancholy is a big part of the artist’s happiness…

How does architecture and urban landscapes affect the sentimental mood of the people in your photos?  Do you think that often there is an emotional battle between those two elements and, if so, who is the winner?
In my opinion, architecture and landscapes do not affect the characters present in my images, they are just an integral part. My photos are taken on the spot. They are never staged, mises-en-scène. The situation, the timing, the frame, the colour ensure that the ordinary is transformed in emotion, the images are formed in front of my eyes and instinctively I sometimes press the camera’s shutter release too early or too late and sometimes magic takes effect… We rarely paint an image at the first attempt. Thus, there is no winner. There’s just an image that will find its spectator, touched or not, and who will find his way around the photo or not. I believe there is no winner in our lives. There are just emotional interpretations that govern them (happiness, sadness, big, small, important, insignificant…)

I got the impression that something almost mystical is hidden behind the apparent calm surface of your photos. Do you think that we humans always run from a rising tide?
The is something mystic in me, not a religious mysticism but a fervent belief in the human being and its countless possibilities of being big and master of his destiny. I am very often disappointed but I never give up this impossible struggle …
And I think that the human being always runs after something that we have called “hope” and this is most probably what makes us move forward…

How do you combine your work in the advertising world and your personal work? How do they influence one another?
My work in advertising fits perfectly with my personal work. It enables me to meet a crowd of designers that are usually very talented. It also allows interesting creative associations as well as countless trips in visually stunning places. It also gives me the possibility to test new techniques and work in a very controlled visual and artistic universe, offering me more creative freedom in my personal work.

What part of the work of a photographer is closer to a voyeur? And what is the role of your intuition in order to connect with the theme of your photos?
The voyeuristic part of the photographer is the moment of observation that allows him to hunt the images but for me it stops immediately as soon as the emotional interpretation begins. Same thing for painting, we see and then we interpret with a series of techniques that give the work a meaning.
Intuition is my only master, images attract me, pictures draw themselves in front of my eyes and I sometimes manage to capture them… These moments are moments of calm, silence, solitude and melancholy that consume my happiness. I love to trigger these kinds of emotions…

What are the things that inspire you the most? Do you have any favourite artists?
I love the work of many artists. Most probably I love more their creations than the artists themselves. It would be quite tedious to enumerate all art pieces that move me as I’m not an artist “fan”! Nevertheless, I would quote Rembrandt who remains the artist that made me love images!

Tell us something about your future plans.
I hope that my future will be punctuated by the infinite pursuit of new images as I take my images primarily for me, to satisfy ravenous appetites of emotions…but I am more and more tempted by an opportunity to present my work to a wider audience, in a gallery for example.