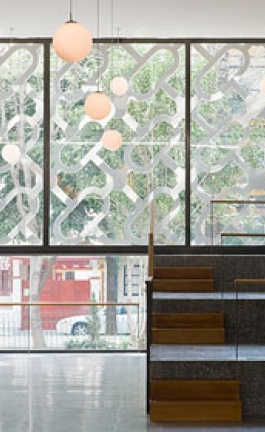 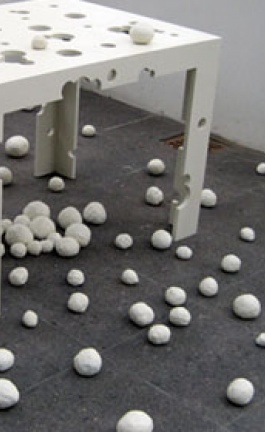 The holes of Sebastian Beltran

A building simple but sophisticated, elitist but accessible, simple but innovating. That was a challenge for NL Architects and it seems that they managed to combine all the above elements by creating TPAC. The Taipei Performing Arts Center could be considered a table with four legs each one different from the others. If this sounds ordinary then you’d better have a look at the pictures as TPAC is far away more than that. An Urban cavity, a Proscenium Arch, an Upside-Down Skyline all in one.

additional text by NL Architects
The dichotomy between high and low culture is slowly disappearing. But how can we create an environment that is inspiring for everyone? Is it possible to be elitist and populist at the same time? How can we envision a truly Public building?

Square³
The Taipei Performing Arts Center aspires to become accessible for everybody. The principal act performed by the building is to elevate a substantial part of its program. By doing so a public square is created underneath it. As such the square fundamentally becomes part of the building: it is included inside it. This could turn out to be a radical innovation…

Table for Three
In a way the building could be considered a Table: four ‘legs’ support a horizontal slab. This ‘open’ block measures 110 x 80 meters with a total height of 64 meters. The ‘tabletop’ is 14 meters high and can in principle accommodate 3 stories. Inside you’ll find a kind of Mall; a fragment of the city that is elevated, a public ‘browsing space’ in the sky. This will be the domain for cultural facilities: the multi media library, music stores, galleries, lobbies, bars, restaurants and clubs. A gaming zone and a casino might be exciting additions.

Towers
The ‘legs’ are programmed as well; in fact they are small skyscrapers. All four are different. One has a ‘waist’, with a large plan that narrows half way and widens again. One has an oversized foot; it contains the Proscenium Theater at its base. And then becomes more slender. One is small at the bottom and expands towards the top -here you’ll find the Grand Theater.

Happy View
By lifting the main plateau of the building to a level slightly higher than the adjacent structures, wonderful panoramas are created. It becomes possible to overlook the city and the surrounding hills.

People’s Theater
The additional asset of this gravity-defying operation is the urban void that comes into being. This 3D urban square creates an informal foyer for the building as a whole. There is no interface, no threshold. Come in, we’re open! It is a place for interaction, for performances, for concerts, for markets. It is a square with a ceiling. Rain and Sun automatically are kept out. It is open-air, but covered! Surprisingly the building contains more void than mass; it’s a space-container, a 3D Plaza.

Organization
The three main programmatic elements, the Theatres, are positioned on different altitudes. The Proscenium Playhouse is placed at the base of the southeast ‘Leg’. The Lobby is placed under this theater so that it is flush with the square, activating the space around it. The Multiform Theatre however, is connected to the southwest leg close to the top. The volume of the Grand Theater is suspended under the horizontal slab. It hovers over the square while still being a part of it.

Route
There are many ways to travel through the building. There are elevators, stairs and escalators. It is possible to go in a direct way or to take the scenic route. A detour is rewarding! It is no longer necessary to take the same path on your way out. A System of Loops comes into being. Some of the elevators are oversized. They can be used for transportation of large goods, but also for moving large groups of people at the same time. Many elevators are placed towards the outside. They are not hidden in a core but become part of the performance. Riding them gives you the feeling of being part of an interactive urban environment. They move up and down like ants on the leg of a table. When reaching the top some elevators suddenly move sideways, allowing unexpected horizontal movement: Logistic Entertainment.

Artery
The Grand Route connects the Lobbies of the Theaters with a series of escalators. It ties them together. Part of the Foyers as such will be open to everybody, but here you will also find the ticket control. Beyond a certain point the theaters are -of course- not freely accessible.

Structure
At the basis lies a four legged table construction that is reinforced in the corners. Multiple variants of ‘stiffening’ are used to create a variety of identities for the legs. By expanding the legs towards the top automatically the spans are reduced. The structure in a way is an orthogonal version of a dome.

3D Square
The ground-level square bends up to allow cars and motor cycles to enter the parking garage. Here trucks can enter the basement. Heavy logistics will be handled from here. Taxis will be able to drive up this ‘Hill’, culminating in a glamorous drop off. Locally the square folds down to allow more spacious connections to the underpasses to Night Market and the Jiantan train station. The act of lifting the building allows for a more or less unobstructed crossing of the square –an elegant feature, since most architecture tends to stand it the way. Whether you are walking from Bai Lin Highschool to take the bus or you are coming from Shinlin Market and are looking for a place to eat your lunch, the square will provide everybody with a sheltered and exciting route or place to stay.

The Performing Arts Hotel
A Hotel could be a successful additional program. It might be beneficial for the exploitation of the complex as a whole. It is supportive also in a literal way, since it constitutes the fourth leg of ‘table’. The Performing Arts Hotel can comfortably feature 60 bedrooms and additional facilities. The bedrooms overlook the city and the spectacular Urban Interior that it helps forming. The Revolving Bar somewhere hangs from the ceiling.

Temple
In a way, the project is an Upside-Down Skyline. The horizontal top layer helps to frame the space beneath. It is not so much the beauty of the form itself that is compelling, but the space in-between. With every step you take this urban cavity changes shape. The structure could be understood as a Proscenium Arch in 4 directions framing city life in many ways.