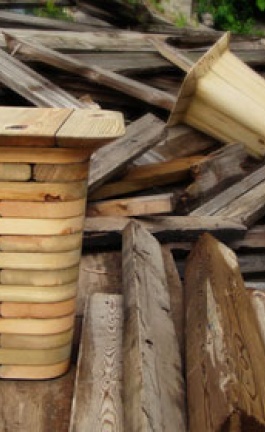 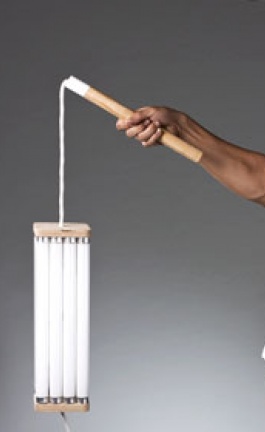 Robert Bradford is certainly fond of toys! He is using them in order to make some of the most promising sculptures we have seen lately, full of color, irony and positive energy. Being in touch with the inner child we all have inside, he manages to keep our senses alert.  Bradford has worked during years as a mental health worker and he sees the parallelisms between art and psychotherapy. No wonder then why he is inspired by the idea of changing the view one has about life, in the same way he reuses toys and waste material in order to give them a new meaning. Being a resident in Cornwall,UK for the past seven years and having lived in San Diego where he worked and taught for five years, this British artist tries to create a fresh and enigmatic language. And it seems that he is a step closer to his dreams since his latest projects have had a big success all over the world. Yatzer, unable to resist, found him and practically interrogated him exclusively for you. We hope you enjoy his work and his interview as much as we did!

Well, Robert, how did everything start?
Everything started on the dining room table and in the hallway when I was small, I have always painted and built things – masks, skulls, brick cities, racetracks – and I managed to get 8 years of Art School before having to do a proper job! My use of toys started about five years ago. I have always liked using found materials with their own history like books, magazines, old wood, tree waste etc. and toys were just an extension of these things. I was in the studio one day where an old toy box was stored; the simple thought that came to me was that if I could find a way of joining lots of them together they would make a wonderful larger form collectively. I liked the huge variety of shapes and colours that were contained within the box I was staring into and I liked the random juxtapositions of types of content. It triggered off many ideas and possibilities...

Toys are a colorful version of the everyday life and at the same time they often represent a return to childhood. How did you decide to use them as the main element of your creations? Are you in touch with the inner child we all have inside?
Toys ARE a colourful version of everyday life including fantasy life, love life, work life, even spiritual life, so pretty much everything can be mentioned/ referred to/ communicated about using them. New ones come out all the time, fads and fancies come and go – a whole cultural and anti-cultural history exists within them, waiting to be explored/ exploited. Like most series, the first couple of pieces were made as experiments, to see if the idea could actually work in tangible reality and of course one thing led to another – but it took me three years of false starts to find the most flexible construction method and another year to start doing it well so it has been no ‘instant fix’.
I am no longer a Young British Artist, but hope that I can contact my ‘inner child’ (actually my inner child has never been very hard to contact although he is a little more worldly wise than he was). However, my use of toys was primarily a formal decision as I have explained and often still is… Because I have been using them for so long, I can tend to forget what they actually are and just think “What have I got that could possibly fit there – blue would be ideal”, decision making goes on like that. And then ‘Oh it’s a gun, would that be O.K. content wise”.
Play is a vital part of making art by process (often unconscious process), I would not ever wish to apologise for that – just trust the ‘play’ activity, enjoy it, and let it happen naturally, it’s fundamental to creativity I think (and it’s not like a real job!).
So much idea-based work appears so sterile if it doesn’t involve either the body or the emotions much I think. We are human and are made of lots of bits.

The Gestalt theory says that the whole is something more than the sum of its parts. To which extent is this idea present in your work?
I don’t believe that the EVERY whole is more than the sum of its parts, but of course I hope my pieces are. They are, after all, a collection of Plastic Tat screwed together so they had better be more than the sum of their parts.  Well, paintings are just a load of old paint on a surface (actual value £50?). There has to be a point of magic or transformation otherwise the ‘bunch old tat’ accusation will be accurate.  Someone walking past one of my dogs in New York was overheard by me to say “That’s a bit junky.” I like to flirt on that edge but fell off (for him) that time.

Do you have a special working progress that you follow?
I have talked about my process a bit already; I am a fairly improvisational artist and tend to work in frenzy of manic activity - so complex objects suit me, because there is always something to do! I am not completely stupid, though sometimes I do just sit and think, well more often stand and think, drive and think, and feel of course and look and look and imagine … weeks go by...

What is the importance of choosing already used materials, that for some people it could be trash, in your creations? Do you think that beauty can be found in the   most unexpected places?
I am working on the edge of nice/ nasty, trashy/ valuable, good taste/ bad taste etc.  Flirting with disaster - I used to make fire sculptures – it keeps me, and hopefully others, awake I think. Wouldn’t want to doze off... History in general is not a primary interest of mine but I like it to appear by default in my work and like the feel of humans having been in contact with the pieces already as long as they have had a good wash, the toys I mean not the humans...
Beauty itself is not a fixed entity; it is subject to changes of fashion and personal taste to an extent. It has some recognised characteristics that can be generalised however, e.g. symmetry, the golden section etc. Artists often make the unacceptable acceptable or better, don’t they? We create an aesthetic of our own which others later come to recognise as good or true. People then wonder why they had not believed before that it was beautiful /interesting.

You worked during many years as a mental health worker in order to support your work and furthermore you have trained and practiced as a psychotherapist in London and Bristol. Has it had any influence in your art?
That stuff never really goes away and there are many parallels and crossovers in the work. Too many to go into huge detail here.
I needed to know how I functioned and why, and was intensely curious about both myself and others, motivations, patterns, tendencies, influences, traits and so on. The interest came from a need I think… I work on the sculptures from the inside outwards towards the surface, there is one simple parallel. Psychotherapies, like art, are also subject to fashion I believe, which could sound a bit worrying.  Although talking in depth to strangers rarely does harm I think, it did me a lot of good for sure and I wanted to pass on some of that. I think I learned a lot, maybe helped quite a bit, and I hope some of that information shows and creates some depth in the work directly and indirectly...

You use often plastic in your creations, but you also experiment with wood and you are fond of painting. Which is your favorite technique and what are you currently working on?
I have pushed the toy thing farther than I have ever pushed anything. I think it has benefited the work. I have been too restless as an artist in the past and shifted styles or media too quickly before they were exhausted or had gone far enough, but a slight shift in materials can be very refreshing, we need to renew ourselves too. Soft toys are a small diversion but are closely linked, whilst giving a completely different feel to the pieces – that was a good find. The new glitter text paintings are quite a separate kind of work (but do return to a series that I did in the early seventies). There is a small link with the toy sculptures in the sense that glitter is usually seen as just for Christmas or only for craftwork, or as a kind of cheap thrill. I like to play with those preconceptions and want to tip the ‘Glitterings’ work in the art bracket despite their humble origins. My origins were fairly humble too. The ‘Glitterarty’ enables me to make some particular statements about the world they and we are living in and about themselves… They are new so I don’t know how long they will go making them. They are getting better visually I think, so I should probably stick with them and follow where they lead… the simple pleasures of daily life.

What are the main reactions you get from people about your work?
I get every kind of reaction from wonderful to awful. Most people think they are clever but may not want one in their house! Kids love them of course and drag their parents over. I get a lot of smiles and also some very seriously disapproving disgusted looks. Much of the work is selling really well  and I love that fact, not only because I can pay the bills without worrying and  follow my work around the globe, but also because I love that people love it – all kinds of people not  just (or even) the art mafia. A person in Chelsea with a very smart accent said “I like that, but I do not covet it” about one of my sniffer dogs.

Tell us something about your future projects.
In my studio at the moment there are various things ‘waiting’... a tiger woman, a man in a suit, various angel heads with cropped hair parked near some airplane wings, a Sniffer dog armature or two, a half started glitter painting that may just get ROBERT BRADFORD ROBERT BRADFORD ROBERT BRADFORD texted onto it… there are a few flat airplanes hanging about too. I have just sold three dogs in Paris and there are not many left in the gallerie. There is a soft toy Tiger Skin Rug started and a sofa prepared for soft toys too. There is a soft toy dog commission outstanding... and several magazines real and online wanting imagery. My website needs updating and I have a small film to shoot for educational T.V. (not to mention Blue Peter). There are several art fairs coming up and some exhibition offers that I need to respond to.
If you asked me again in a few weeks I may be a bit clearer as to what is  next… they all look like a lot of fun and any or all feel exciting. I would like to know what any of them would look like completed… and of course there is the rest of life that is not art!