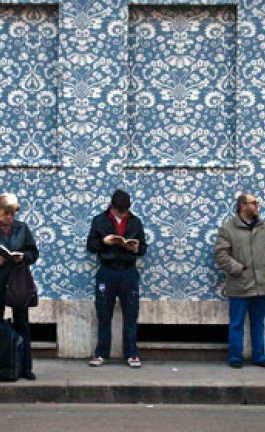 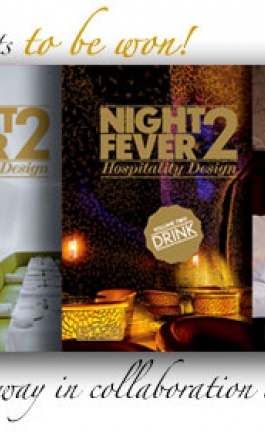 FIVE complete sets of NIGHT FEVER - 2 by FRAME Publishers to be won!

At New York Design Week, we got the chance to meet Victoria's Secret Angel, Alessandra Ambrosio, Carlos Jereisatti (CEO of Iguatemi) and Tony Chambers (Editor in Chief, Wallpaper* Magazine).  It’s been a long time since Tony Chambers and Costas Voyatzis (Editor in Chief, Yatzer) met in St. Tropez during the DOMINO yacht's presentation by RIVA as they were invited by Veuve Clicquot.  Both have been very busy and it was time to catch up! Yatzer was in NYC for the launch of Wallpaper’s recent June issue, Born in Brazil, and we gladly enjoyed the Caipirinha, finger food, the people and the conversations. What better way to begin the weekend than at the Wallpaper* party!

As the world witnesses the growth of the BRIC nations (Brazil, Russia, India, China), Wallpaper* is half way through their commitment to dedicate an issue to each of those nations.  First China, now it is Brazil's turn.  If Brazil is the most exciting country on earth at this moment, we want our readers to get a peak on why and how did Tony Chambers experience this exciting nation full of culture, creativity, oil, resources and the drive to grow and move forward.

If you are not familiar with Tony Chambers’ background, the words that follow will make you!
Being an art director of GQ Magazine for six years, Tony Chambers twice won the "Art Director of the Year Award" at the Periodical Publishers Association Awards.  In 2003 he joined Wallpaper* and after four years as a creative director on March 2, 2007 he has been appointed editor-in-chief of the magazine.

Yatzer sat down with Mr. Chambers to learn a bit about Brazil, his Wallpaper* team and their efforts towards exploring this great nation.

Mr. Chambers , explain to us the importance of Brazil and why there was an interest to cover an entire issue in this country?
It’s part two of our four-year plan of dedicating an entire issue to the BRIC Nations. Last year was ‘Made in China’. Brazil is on a serious roll – from the discovery of massive offshore oil reserves to the awarding of the 2014 World Cup and the 2016 Olympic games – and we wanted to be at the centre of the action. And take our readers with us.  It’s the most exciting country on earth.

For those who have never visited this great country, tell us a bit about Brazil from your perspective? Describe to us Brazil in six individual words.
Beautiful. Radical. Amorous. Sexy. Independent. Languorous.¨I couldn’t think of a Z, so used the Portuguese spelling.

Your point of view matters to thousands of people, how difficult is to pair down the selection on what to include to represent the palette that best communicates Brazil and engages with the audience?
Not too difficult, as the Wallpaper* team are a very experienced bunch of well-travelled journalists. Experience gives you confidence and a good perspective on what is and what isn’t possible within the parameters of magazine publishing. It also allows you not to fear making mistakes.

Much is being said and covered on the BRIC (Brazil, Russia, India, China) nations and how they are growing into economic, cultural, creative and competitive markets. How do you see Brazil different from the other BRIC nations?
It’s the top of the pile at the moment. They have a stronger (modern) design heritage than the others and an extraordinary wealth of natural resources. Their future prosperity really is in their own hands.

As the Editor in Chief of Wallpaper but also a visual journalist, how did you and your team approach the facets of obtaining and soaking in Brazil's identity in what defines a nation culturally, politically, architecturally, etc.?
We had a great team of advisors (see the issue) that pointed us in the right directions. Creative leaders from all the areas we cover in Wallpaper*. We came with a tight plan, but left ourselves plenty of time while we were out there to wander off that plan and discover the unexpected.

We all know that Brazil is not really entering the fashion, art and design scene now. They have been providing amazing work for decades but as they enter the world stage now through exposure in media, how do you see Brazilians currently expressing themselves through design?
The way they’ve always done it. The classic modernist aesthetic and philosophy seems innate, but it’s always produced with their own individual twist and flavour.

¨Mr. Chambers, we are sure that you indulged in great food, sounds, drinks and sweets from this eclectic nation with influences from Portugal, Italy, Spain, Germany, Japan and the Middle East. Tell us some of your favorite food, drinks, sweets of choice while being there.
Gosh, I could write ‘til midnight about the epicurean delights we experienced in Brazil. But in true Wallpaper* style, I’ll edit down.
In Sao Paulo, the Fasano restaurant is a feast for the eyes as well as the tummy. It has that air of power dining one associates with New York’s Four Seasons: Phillip Johnson’s (with Mies van der Rohe) masterpiece at the Seagram building. Then, Dalva e Dito, run by world-renowned Brazilian chef Alex Atala, has a much more relaxed traditional home-cooking vibe. You want to stay and graze all day. ¨I was fortunate to stay at the Emiliano Hotel in Sao Paolo, so experienced the best service one could wish for. Each evening there was an elegantly presented tray of traditional Brazilian sweets/pastries accompanied by a hand-written description from the lovely Julie – my own personal Mordomia (Butler).
My three favourites were: ‘Quindim de cow’, a pastry made from egg yolk and coconut, typical from Brazil’s most northern region and brought to them by the Africans. ‘Brigadeiro’,  the classic Brazilian chocolate cake. And ‘Beijinho’, the typical Brazilian birthday-party pastry made with coconut, and it means ‘little kiss.
And I’ll give you two In Rio:¨You shouldn’t visit without sampling the delights of Sushi Leblon. Always packed with effortlessly beautiful people, it’s a Rio classic. Then new kid on the block and my personal favourite is Oui Oui in the Botafogo district. Contemporary but homely fare served in tapas style portions.

In your opinion, what are some of the things that we can learn from Brazilian designers and artists?
Use your heart and your soul as well as your head.

How are Brazilian designers utilizing tradition, history and values and injecting them into their work?
In the way they always have, It comes naturally to them.

¨We see that you went through the major influencers of the past decades in the issue, we briefly met and spoke to Zanini de Zanine at ICFF, whom you considered as the current influence in Brazilian furniture design, how do you see him expressing modernity through his work?
His Moeda chair – made from the perforated sheets left over from the production of Brazilian 10-cent coins – is 21st century salvage-chic genius.

Fernando and Humberto Campana seem to have gained international recognition in the world of design. How has their work influenced and inspired a new array of young designers all over the world?
They proved that you can succeed (creatively and financially) by sticking to your chosen path. They came from unconventional roots and worked in unconventional ways. They did things their way, and manufacturing companies adapted to suit them.  An incredible example to any young designer.

Because you are intimately involved in the London design scene, how do you see similarities, influences, conversations or relationships between the Brazilian art and design world and London's very own flavor?
Thankfully they are very different – and long may that last. Homogenisation is a real modern day curse. Vive la différence! – as the Brazil’s French ambassador may say.

Could you provide our readers with some names of designers, artists and musicians to follow in the Brazilian scene?
Please see the issue.

How many different cover options or ideas were considered?  Why were these three chosen?
We felt we needed to represent both Sao Paolo and Rio, as they were our two main bases, so we produced two Newsstand covers. It also gave us the opportunity to showcase a sexy Brazilian Girl and a sexy Brazilian boy. It would be a crime not to. We always produce a special ‘artist’ designed Ltd edition cover just for our subscribers and there was no one better for this than Vik Muniz. Vik ended up being a great source of ideas for the whole issue – he’s such a great bloke.

The Wallpaper* issue, Born in Brazil, is currently in newsstands all over the globe, make sure to take a look at how Brazil is inspiring within and how their love is pouring out.