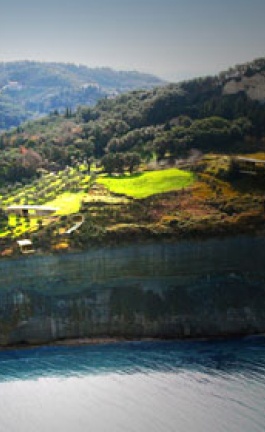 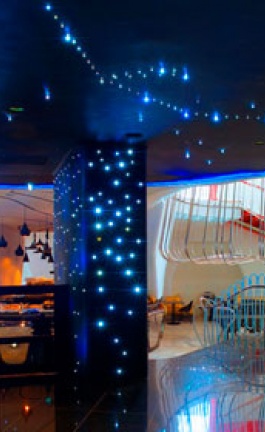 500,000 crystals VS. 500,000 ruffles:  What happens when Viktor and Rolf, Studio Job, Swarovski and Roisin Murphy come together in the Jardin des Tulleries during the Paris Spring/Summer 2010 shows? Pure 'prêt-à-porter' perfection.  Never one to miss a "beat", make that a 'cut';  Viktor and Rolf's Sping/Summer 2010 "Pedestal Collection" was a visual trip for the senses.  Combining the worlds of music, design and fashion, the designers mixed haute couture tailoring with an out of this world modernity.

Exaggerated classic formal wears were sliced in-two, polka-dotted chopped and turned on its sides to form a new princess;  one who rocks out to Roisin Murphy and never leaves the party till the wee hours of the night.  Super full dresses completely filled with folds of tulle were shown with more importance to the space missing, than that of what remained.  The negative space held court in the majority of the collection, with cut-outs of tulle or that of the bright colors shown on bases of blacks and neutrals.  "With the credit crunch and everybody cutting back, we decided to cut tulle ball gowns,"- Rolf Snoeren (via: style.com).  What wasn't cut, was that of pure imagination and complete creativity.  (Lets not even mention the backstage process of how the girls were literally 'inserted' into the dresses.)

Standing on her proper pedestal, Roisin Murphy belted out future sounds and lyrics to beats that continued the modern feel and emotions of the collection.  Debuting "Royal -T" and "Demon Lover" new music from her upcoming album, Murphy rocked in a custom (baby bump defying) over-stuffed pink tutu that any pregnant pop icon would love.

Beyond the mix of pop stars, tulle and plissé... the set, the lighting and music engaged the audience in a way only Viktor & Rolf can do.  Standing and lit side stage was another star of the show, Studio Job's 4m+ Swarovski Globe that dominated and glittered as bright as the models on the runway.  Designed in 2008 for the Swarovski Crystal Palace in Milan, the globe is encrusted with 500,000 Swarovski crystals. “Maybe it’s the sense of time and gravity that touches us, maybe it is the earth that keeps turning and turning.” (Studio Job - via Swarovski.com).  Or maybe it was just a little reminder that in the world of fashion Viktor & Rolf can shine just as bright.