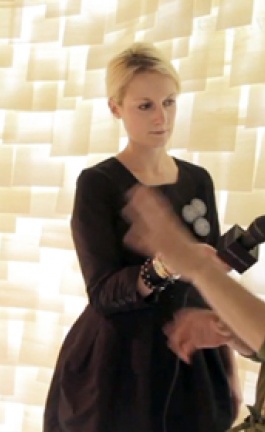 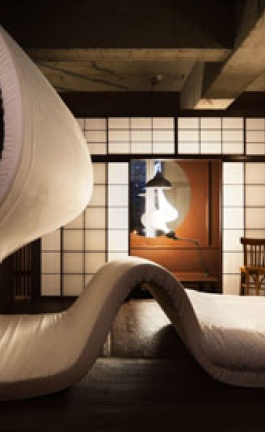 Six perfume bottles sat atop six illuminated boxes high above the rainy streets on the 11th floor of a building in midtown NYC.  The skyline of modern and art deco buildings created a perfect backdrop for the display, the impressive bottles holding their own amidst the modern architectural marvels.  It seemed rather fitting, each perfume much like the buildings behind them; strong and rooted in a foundation, a great vision, an idea that may have seemed far away at one point but was edited down and eventually executed to the finished product… an exquisite work of art.

Yatzer was invited to preview series three of Six Scents Parfums before they officially launch in November.  Six Scents Parfums are exclusive fragrances that are the collaboration of fashion designers and expert perfumers.  Together, they work to realize the designer’s vision of the scent they hope to create according to the theme of the series “…these limited edition fragrances are designed to represent a global range of contemporary views on creativity and culture. Through the designers’ concepts and the perfumers’ knowledge of fine fragrance, two artistic disciplines come together to create new perfume compositions and multi-sensory experiences.”

Series three was about childhood and adolescence, an “exploration into the nature of childhood memories and the influence of adolescence on identity.”  The six unisex fragrances each took a unique stand in the face of the theme.  The featured designers this year are Alexis Mabille, Mary Katrantzou, Junn.J, Rad Hourani, N.Hoolywood, and Ohne Titel.  Going further with the theme, with each series a related charity is chosen to benefit from the sales.  In this case a percentage of the proceeds will go to War Child International, a global organization that protects the rights of children, educating them, and reducing poverty.

One can tell that artists are involved in the project from start to finish.  Looking at the meticulous design of the boxes, and numbered bottles, each keepsake box opens up to a portrait done by Robert Knoke along with the Six Scents: Series Three documentary and short films (some of the contributing filmmakers include Alia Raza, Olaf Breuning, Iain Forsyth& Jane Pollard, James Widegren, and more).
Only 3,000 bottles of each fragrance will be available.

No. 2 Trompe L’Oeil by Mary Katrantzou and Shyamala Maisondieu
“The inspiration is a mix between Mary’s memories of her travel experiences, when she was a child, and her unique style. It is feminine and fluid but with a strong character, her designs are colorful and imaginative, and I wanted to create a fragrance which responds to all these characters. I wanted to create a floral note with a distinctive signature. So I chose mimosa as the main theme. It is a classical feminine theme. I modernized it with some fruity, and citrusy facets, to bring colors and life. I added more floral notes in a bouquet to have a voluptuous femininity. For the drydown I added some oriental notes to bring a touch of sensuality”. Shyamala Maisondieu, perfumer.â¨
Ingredients
Top Notes: Bitter Orange, Mandarin, Neroli, Pearâ¨
Heart Notes: Mimosa, Rose Absolute, Ylang Ylang, Tuberose Absolute, Orris Absoluteâ¨
Bottom Notes: Amyris, Tonka Beans, Ambrette Seeds, Vanilla Absoluteâ¨

No. 3 Can’t Smell Fear by Juun.J and Natalie Gracia-Cetto
“I tried to capture some of Juun J’s childhood memories: the smell of the skin in a city with concrete and wooden building. I wanted to create a fragrance that provides comfort, that protects you in an urban somewhat hostile universe. I choose a leathery theme, comfortable and reassuring. It creates like an olfactive aura, a comfort zone that protects against the city. I added some woody and floral notes to bring refinement, and some amber and musks to have a subtle sensual touch”. Natalie Gracia-Cetto, perfumerâ¨ â¨.
Ingredients
Top Notes: Bergamot Essence, Green Mandarin Essence, Pink Pepper Essence, Nutmeg Essence
Heart Notes: Orris, Ambrette Seeds Essence, Cederwood Atlas Essence, Incense Resinoid
Bottom Notes: Leather Accord, Sandalwood, Amber, Musksâ¨

No. 4 Ascent by Rad Hourani and Christophe Raynaud
“I was inspired by Rad’s vision of the cycle of life, going from birth to death, from ashes to ashes, as in David Bowie’s song. Origin of life is expressed by a fresh accord, green and watery, like a drop of sperm. Childhood is evoked by baby powder, it’s a musky and powdery scent. Midlife is expressed by a leathery note, comfortable yet strong likeâ¨a leather jacket. Then the end of life is symbolised by incense, not a morbid, but a liturgic odor, evoking the ambiance of the churches. The results is a contrasting fragrance, luminous yet dark, shiny and mate, like Rad’s fashion.” - Christophe Raynaud, perfumer.
Ingredients
Top Notes: Pear Juice, Violet Leafâ¨
Heart Notes: Ylang Ylang, Rose, Cedarwood, Leather Accordâ¨
Bottom Notes: Incense, Powdery Musks, Tonka Beans, Benzoinâ¨

No. 5 #087 by N.Hoolywood and Stephen Nilsen
“For Daisuke’s fragrance, I wanted to capture a quintessential moment from his life that had made an impression on him– an olfactive snapshot that defines who he is. When we first spoke, he wanted a fragrance to recreate the feeling of arriving in Los Angeles airport from Japan 30 years ago. And as I got to know him, I found that the moment was actually a culmination of memories from his past – a contrasting combination of elements from nature and childhood: the smell of engine oil in his father’s car; getting off at the Kugenuma Beach train station and inhaling the saltiness of the ocean; the mysterious scent of Kurobe dam releasing water on a cloudy, snowy day; and the clean, relaxing feeling of grooming and bathing captured through the scent of the hiba tree, hinoki wood, cypress, nutmeg and rosemary. As we worked together on the fragrance, I also found that woody notes resonated positively with his current state of mind, so I faceted the base notes with sandalwood and fir balsam for an olfactive echo between his past and present.” -Stephen Nilsen, perfumerâ¨ .
Ingredients
Top Notes: Hiba tree, sugi leaves, green cypress
Heart Notes: Motor oil, salty-icy water accord, nutmeg, Moroccan rosemaryâ¨
Bottom Notes: Hinoki wood, sandalwood, fir balsamâ¨

No. 6 M by Ohne Titel and Yann Vasnier
“M was a collaborative project with Ohne Titel. Meeting Flora and Alexa, you are immediately struck by the level of ease, familiarity and cohesiveness of their conversation together. They build off each other’s ideas, sharing the same open vision. The same pattern translated for their choice of ingredients and the expression of the fragrance, they both gravitated to the same ingredients we smelled and built together. I started Oh My Deer with a core of leather and an animalic feeling. Alexa and Flora spoke about their rebellious side when growing up, night clubs and late outings, the feeling of warm, slightly sweaty skin. I tried to recreate their attention to intricate tailoring, architecture of design, their care of detail, all these very feminine aspects using these strong and signature materials like cardamom, safraleine, and leather.“ - Yann Vasnier, perfumer.
Ingredients
Top Notes: Cardamom absolute
Heart Notes: Cedarwood atlas orpurTM, touch of black plumâ¨
Bottom Notes: Tonka beans Venezuela, castoreum, civet, musks : moxaloneTM captive, cosmoneTM