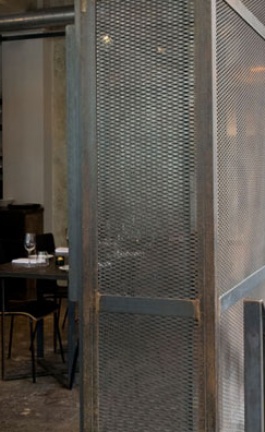 Dabbous by Brinkworth in Fitzrovia, London

Yatzer was invited to Rome for the ZegnArt project, a special contemporary art initiative by Ermenegildo Zegna which will be hosted by various countries around the globe in the form of a triple structure. We had the pleasure of experiencing the first special initiative within ZegnArt, a specially commissioned new installation by artistic duo Lucy and Jorge Orta, first hand. The works, which are part of the Special Projects, were presented and conceived for the MAXXI-National Museum of XXI Century Arts in collaboration with the museum and the Centre for Sustainable Fashion - London College of Fashion.

The installation named ‘Fabulae Romanae’ which translates into ‘Roman Tales’ has been curated by Maria Luisa Frisa and will be on display until September 2012. The duo, Lucy+Jorge Orta, is well known for their exploration of emerging issues within a contemporary society and their practice is driven by the principals of ethics and sustainability in fashion. Recurring themes, part of their body of work, are related round daily life such as survival, shelter and a sense of a nomadic lifestyle. Especially for MAXXI, the artists created tailor made tents and parachutes, video art performances and a series of characters known as ‘The Spirits’, that according to the curator have ''become the messengers of the noises and experiences of the urban daily life.''

Although the installations convey a sense of the temporary, they also reference contemporary Roman life where ‘The Spirits’ resemble city travelers that reveal secrets of the actual city. The fabrics that adorn the sculptures also convey a materiality interpreted in an ethereal and a sustainable wisdom. The MAXXI Museum now embodies both its roles as host and hub through which their messages are transmitted. Fashion and Art are harmoniously blended in a casual but yet sophisticated manner projecting fundamental concepts, part of the artists’ research and that of Zegna’s core mentality.

ZegnArt's next destination is India and the city of Mumbai, followed by Turkey in 2013 and Brazil in 2014. In a country that is as historically charged as India, ZegnArt is seeking new challenges within the public sphere where the project will take on a stimulating and meaningful dimension. In terms of Mumbai, it is hoped that it will ''test the concept of public space in comparison with the urban fabric of India’s most densely populated city.''

>>The project assumes the meaning of 'homage' to Rome, but it is also a reinterpretation of the city through the Domes Dwellings and the Spirits - wearable sculptures on display in the museum - and the movement of these elements through the film’s storyboard.  The Zegna fabrics, thanks to their characteristics, the outstanding performances and the flexibility of use, are the actors interpreting the fundamental concepts of the artists’ research: protection, sheltering, movement and ethics at the forefront of the contemporary emergencies. <<
Maria Luisa Frisa