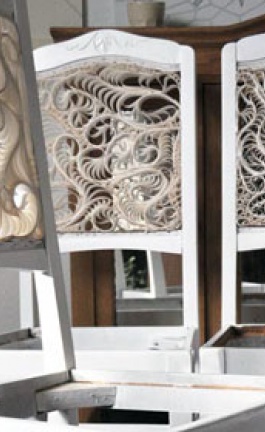 Her name is Laia Clos and after receiving her first degree in History of Art from the University of Barcelona she moved on to study Graphic Design at the Escola Massana. Graduating in 1997, she begun her professional experience, first with Compañía General de Ideas and later at the studio Enric Jardí.  In 2006 she opened her own studio - ‘Mot’ and today she is teaching design at the Escola Eina - Universitat Autònoma de Barcelona - and is a board member of the ADG FAD.

One of Clos' latest projects is called "Lesquatrestacions"  - otherwise 'The Four Seasons' - and refers to the musical composition of  the Italian 18th century composer, Antonio Vivaldi.  It is essentially a graphic interpretation of the four violin concertos that compose this baroque masterpiece.

To create 'Lesquatrestacions', Mot studio designed a prototype - 'SisTeMu' - a graphic notation system which looks at interpreting musical texture." ‘SisTeMu’ translates musical score into simple geometric forms and basic printing colours, exploring as such the rhythmic and melodic harmonies found in musical composition.  It somewhat simplifies the complexity and mathematical structure, making it accessible to the viewer through a visual narrative."

Each of the four posters  is the entire translation of one concerto – one season – played by the lead violin. The score played by all three violins can be found in the ‘Lesquatrestacions’ book which may be produced in the future!  At the moment the entire collection of four posters (Offset printed, CMYK, A1 size, Munken Linx 135 gr paper) is available at TOM Editions and each one costs €30.00. Each poster comes in a cardboard tube with a complementary leaflet of explanations. So, what are you waiting for?