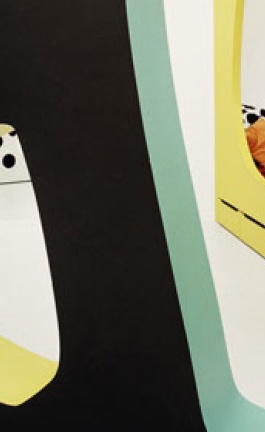 Crystal Garden is the impressive site specific project by the artist Flavio Favelli, which will be visible in Milan, in a former garage in Via Tortona, from 26 September until 2 October 2008. Following the projects by Luca Vitone (performance, Fossati Esterni del Castello Sforzesco, 2007), Hans Schabus and the Very Pleasure (Laboratori del Teatro alla Scala, 2006) and Project Room | A show without works (Spazio Lima, 2005), Crystal Garden will be the fourth yearly contemporary art event supported by ROBERTO DEL CARLO, the made in Italy line of accessories. Among future activities, ROBERTO DEL CARLO is planning to widen the company’s activities connected to contemporary art, investing in the production of new exhibition projects and in the promotion of art initiatives with Italian and international artists.

Crystal Garden – curated, like the former ROBERTO DEL CARLO events, by Daniele Perra (art critic and journalist) – will take place in a large 400 square metre space hosting inside it a real “crystal garden”; the core of the artwork will be an old glass and iron greenhouse, entirely renewed and decorated with wall lamps and parts of old chandeliers. The space will also be embellished by overhead lights in white glass and Marie Therese style chandeliers. In this project Favelli turned for inspiration to the glass and iron Crystal Palace (designed by Joseph Paxton for the 1851 Great Exhibition in London) and to Laeken’s luxurious XIX century royal greenhouse (indeed one of the most beautiful Art Nouveau creations, open for only a few days a year, built for Leopold II between 1874 and 1895 and designed by Alphonse Balat). Yet, Flavio Favelli’s Crystal Garden won’t contain beautiful plants or fl owers like Laeken’s: his Crystal Garden will be an empty “bachelor machine”, in which the sumptuousness of the past will clash with the fragmentariness of the present, with pieces of broken glass refl ecting our times of social and political uncertainty.

Talking about his project the artist said: “I was born in Florence, the most Italian among Italian cities. My mother used to take me to Boboli because of the gardens, the kind of gardens with a pond and swan, just like those at Fortezza da Basso. Gardens have always attracted me because they are great artifi cial projects. Decorations, gazebos, rose beds, hedges and greenhouses never change. Greenhouses especially are a sort of sacred place... In my work I’m presenting this old greenhouse, half ruined and half rebuilt by myself with old pieces of iron. The result will be a somewhat ramshackle but also austere building. I think I’ll decorate it and also “overlay” it with all those pieces of glass and chandeliers I have collected over the years; I’ll turn it into a sort of abandoned house, where one abandons drops of glass, a shining house.. ”

“In between anti-design (tables too high to be used or mirrors made of small pieces of black non refl ecting glass) and a retro feel (chandeliers made with used ice cream cups), Flavio Favelli’s research is extremely planned and rigorous” - explains Daniele Perra – “All his works, site specifi gorous” specifific or installations - a kneeling stool built with objects that belonged to his family or that he found in fl ea or antique markets, his chandeliers, his mirrors and different size old blackboards - they all preserve a memory of personal or collective experience. Favelli is fascinated not by the objects he uses, but rather by what they represent and have represented in the past. Favelli is very interested in designing and constructing spaces and environments – he has in fact entirely transformed his own home and studio in Savignano, on the hills near Bologna, into a huge artwork/museum”.

ROBERTO DEL CARLO is not only a fashion line but an authentic laboratory of luxury accessories. Its products are required all around the world: United States, Japan, Australia, Europe and Italy especially; it is in fact in Italy that the outstanding run towards today’s success started: from the premises in Lucca, Roberto del Carlo, spirit of the company’s creativity, and Luigi Pierro – now marketing director of ROBERTO DEL CARLO – debuted in the 90s with their fi rst hand made footwear collections which have become must haves in the most exclusive boutiques. ROBERTO DEL CARLO is an international brand, a new expression of real and authentic luxury that treasures its original character: superior quality materials, impeccable fi nishings and a highly rigorous design.

Daniele Perra is an art critic and curator. He is author of Impatto Digitale. Dall’immagine elaborata all’immagine partecipata: il computer nell’arte contemporanea, published by Baskerville, Bologna. In 2006, he was member of the selection committee for the Premio Furla and for the Premio Artegiovane “Milano e Torino incontrano ... l’Arte”. He currently collaborates with a series of magazines (“Box”, “GQ”, “Kult”, “Luna”) and his essays have been published in art catalogues. He has curated several exhibitions, among which: Shahryar Nashat, in collaboration with the Centro per l’Arte Contemporanea Luigi Pecci, Cantieri Culturali ex-Macelli, Prato (2003); Project Room. A show without works / Una mostra senza opere (Spazio Lima, Milan 2005, then travelling to La Box Bourges, Ecole Nationale Supérieure d’Art de Bourges); Hans Schabus and the Very Pleasure (Laboratori del Teatro alla Scala, Milan, 2006); Trallalero, a project by Luca Vitone (Fossati Esterni del Castello Sforzesco, Milan, 2007). He taught a course of Phenomenology of Contemporary Art at the Scuola Politecnica di Design in Milan (2004-2005), was Managing Editor of “tema celeste” (1999-2007) and collaborated from 2000 to 2006 with the Sunday issue of “Il Sole24ORE”. Daniele Perra lives in Milan.

Crystal Garden will be set up in an ex-garage built in what once was a foundry, part of the former Ansaldo steelworks industrial area in Milan. The space is in via Tortona, in an area lying between the Naviglio Grande canal and via Solari. Like Soho in London, Soho and Chelsea in New York and Kreis 4 and 5 in Zurich, this part of Milan has recently undergone radical transformations, becoming a multifunctional area comprising housing, traditional productive realities, as well as more innovative ones, related to culture, communication and visual communication, all developing in large converted former industrial buildings and areas.