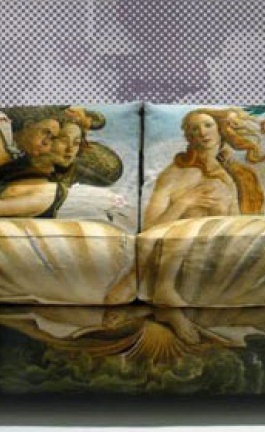 the Birth of Venus.. on a sofa

Between 6-10th of february, “Future Living” exhibition took place at telefonplan in Stockholm, where young designers were showing and selling their products. Hinori Tsukue a japanese furniture designer and interior architect (MFA Architect) and one of the DUVIDU designers was one of the exhibitors. The exhibition was held at the same time with the Stockholm Furniture Fair 2008.

( DUVIDU = the name given to the collaboration between Hironori Tsukue, Erik Tidäng and Tobias Birgersson. Duvidu was founded in the spring of 2006 out of a mutual interest and respect for each other’s ideas and designs. It was decided to test what could come out of collaborative projects, and hence Duvidu was born. All three have been educated through the traditional “Craft and Design” education, but all differ in their respective specialisations. Erik and Tobias are metalsmiths, encompassing both the fields of silversmithing and blacksmithing. Hironori brings furniture designs and carpentry to the table. Duvidu creates products and interior design solutions that tests to the full both the combined talents of the group, and the individual craft/material skillsets of each designer)