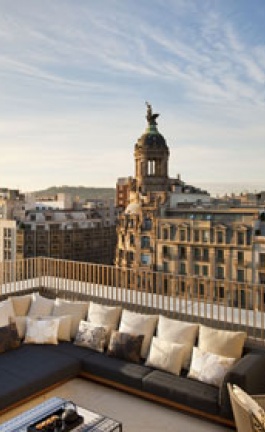 The new Mandarin Oriental Hotel by Patricia Urquiola in Barcelona

John Franzen is an artist working with various media, who was born in Germany, raised in Belgium, and studied Art at the Academy of Fine Arts in Maastricht. He graduated in 2007 and decided to stay in the South of the Netherlands because “it feels like home”.

Both Franzen’s parents were nurses. Their profession called for mobility, which is the reason  why the Franzens had moved eight times, by the time he was just seven. Finding friends was hard for the young John. He never stayed anywhere long enough to connect with others and so his social life ouside  his immediate family circle was limited. When they moved to the Belgian countryside he got closer to nature,  where he believes  he started developing his aesthetics.

The solitude pushed him to create things. A piece of paper and pens became his valve to let off steam. In early years he had the potential for aggression, but  creating helped him calm down. His kindergarten teacher noticed that Franzen had scope for creative activities, and that observation remains true today.

When he applied at the Academy of Fine Arts one of the teachers asked him during the entrance examination who his favorite artists  were  and which museums had  he  visited. But John, at that time, had never been to any museum and the only people he knew were inventors and engineers...he had no idea about any artist! When he was asked "why he wanted to study Art" he answered that creating “soothes” him. They could have referred him to a good yoga teacher, but they did not. Instead, much to their credit, they accepted him at the Academy.

Franzen draws, paints and makes sculptures. Sometimes he creates objects, videos and illustrations. “I have the opinion that you should deal with different media and information at the same time. This involves interdisciplinary thinking and willing to research coherence of various interests and values”,  and the willingnes  to research the coherence of various interests and values,says the artist.

Looking at his body of work one can see plants, organic forms and complex structures. All subconsciously taken from nature: a subject he has confidence in because it never forsakes him. ‘What I do is an expression of my emotions, based on my research. I leave these feelings in form of images. This procedure focuses on my inner state. The concept for this is to be aware of my unconscious,’ underlines Franzen.

Franzen's mind comes across many ideas. Sometimes they deal with sociology, sometimes with medicine, others with engineering or physical models. Being a perfectionist, he spends a lot of time trying to illustrate his visions, which ofthen finds too immature to present.

John Franzen has a strong physique and an open character. He is fast and very precise. So it is surprising to hear that he rates himself as insecure. This might be the reason why, in recent years, he hesitated to show his work. One wonders whether this restraint could be due to his limited social contacts during childhood.

The sculptures in plaster, paper or porcelain come into existence through the artist’s intuition. Franzen experiments with the materials until they respond with a form. The pieces are reminiscent of the structures found in nature.

‘Lena's bed’ is a collaboration with his girlfriend Lena Berens. The result is a combination of her ideas and his manual skills. John Franzen says there are moments that he enjoys working on various projects with other people. Right now he is working on a jewelry collection called ‘fragile’, another project in collaboration with Berens.

The materials Franzen uses are dependent on the available resources. MDF or plaster is not his first choice, rather a current possibility. If he could, he would work mainly with pure gold, because of its high energy and density. Also with high-purity silicon and porcelain because of its excellent and diverse use.

At the end of our conversation I asked Franzen where he sees himself in 10 years. He was silent for some minutes and then said ‘I don’t know’'. He is a big dreamer and doesn’t want to get lost in his thoughts which may lead to disappointment. He would rather work until things work for him. A while before the end of our convertation, John looked towards the tree structure that was laying next to him and explained to me in detail how this exceptional piece was created by nature. His passion for mother nature’s beauty can be very reassuring or shall we say ‘soothing’!

current exhibition
The Visible Progress of the Invisible
Cheng Yan Tan and John Franzen at B32 gallery in Maastricht, NL
Duration: 10 December 2010 - 16 January 2011