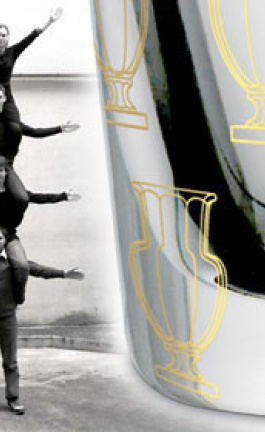 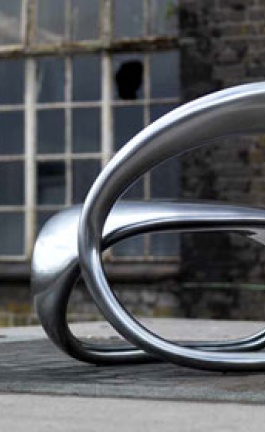 With the Rémanence candelabra, Noé Duchaufour Lawrance chose a perilous exercise – a radical re-conceptualization of the Baccarat light fixture. Stepping away from the brand’s vocabulary, he rediscovers Baccarat, even more clearly, through the illusion of a classic candelabra embedded in a huge, dark mirror revealed, magically, by light.

Noé Duchaufour Lawrance and the Rémanence Candelabra
Over the last few years, the design world has come to appreciate Noé Duchaufour’s elegant silhouette and expressive smile. Many find his talent, combined with humor, kindness and an easy going nature, to be irresistible. His selflessness is matched by his gift for designing space and his predilection for places where congeniality and dialogue mingle, where he can choose the colors of the universe he imagines.
His achievements feature international successes, including the London restaurant, Sketch, where he shared the spotlight with other design stars; the Paris restaurant, Senderens (the former Lucas Carton), at Place de la Madeleine; the Senequier brasserie in Saint Tropez; and, in partnership with the Degrippes Gobé agency, the new design for the Air France lounges (the first site has already opened in Tokyo).
The spaces he designs often inspire furniture and lighting, so Noé’s first lighting project for Baccarat at the Senderens restaurant sparked the idea to “distill” Baccarat’s vintage designs through an object in which crystal would be only symbolic. That notion gave birth to the principle of Rémanence: to introduce the public to Baccarat’s essence through sumptuous designs drawn from the archives, reproduced and engraved on a contemporary material.
Today, the Rémanence light fixture, a superb, monolithic dark mirror, fits perfectly in Baccarat’s contemporary universe. When lit, it becomes a magical object, revealing the finely-chiseled phantom image of a classic candelabra. Specifically, the famous candelabra that belonged to the Czarina, the last empress of Russia. Light brings its engraved pendants into view, dangling from twisted branches, reproduced as luminescent engravings against the mirror’s inky background multiplying into infinity. A polished stainless steel band and pedestal frame the candelabra, hiding the LED lighting that can be adjusted with a built-in dimmer.
Noé Duchaufour Lawrance’s challenge was to preserve the essence of Baccarat and its origins, with a contemporary eye. The wager succeeded brilliantly. It has also defined a new, creative approach for Baccarat that offers a wealth of promising prospects and perspectives.

Remanence: Act of remaining, persisting, length, continuity of something. In other words, persistence.