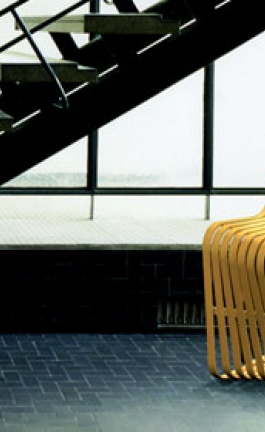 43 by Konstantin Grcic for yii 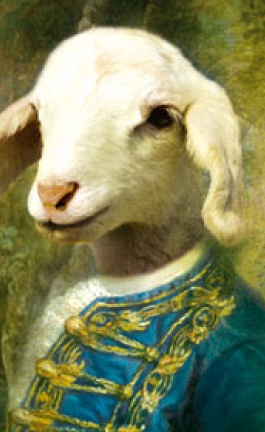 Established as a product designer in 1998, Tanner’s work soon became to be some of the most recognisable products emerging from the craft and design scene. In 2005 Andrew Tanner was awarded ‘Young Designer of the Year’ and in 2008 his collections were awarded the ‘Future Classic’ award. 2009 celebrates 10 years of design for this designer who has been hailed as ‘the next William Morris of his generation’.

Launching at the Exhibition are four new collections which have been inspired by the past and the present. Contemporary forms hold traditional imagery whilst Tanner plays with functional design and incorporates the senses through his new collections of textiles, pewter and bone china.

Finally; ‘A stitch in time’ is the centrepiece for the new collections. Inspiration is gathered from Tapestry and Cross stitch designs of yellow and blue breasted birds in woodlands. For this collection Tanner sourced historical textiles and found a way to freeze the pattern in time on the bone china forms. Traditional pattern meets contemporary form and the collection comprises of a Large Vase, Small Vase and Centre Piece Bowl.

‘A stitch in time is anther snapshot from my own past’ explains Tanner.
‘I would spend a winter’s Sunday afternoon with my grandmother and she would work on tapestries that would become a bolster or a fireguard whilst I toasted bread on the arga. I wanted to capture this craft through modern day forms yet still retain an element of nostalgia. The bone china has a translucent quality which gently allows light to transcend through the designs adding to the beauty of the piece.’

Andrew is currently writing a new design book titled ‘Batch – the work of the designer-maker’ for A and C Black,(a division of Bloomsbury Press) due for launch in 2010.

The ‘Dinnertime’ wall plate collection is a series of Bone-China plates which have been pierced through with still life silhouettes of Parisian carriage clocks. ‘Dinnertime’ Tanner drew inspiration from the Victorian era where plates were seen as items of decoration and hung on walls.

‘I wanted to create a product that was completely non-functional other than that of providing decoration’ explains Tanner. ‘The collection was inspired by the ornate carriage clocks that would be found in very grand and highly opulent houses of distinction. I wanted to capture this decorative nature and create a collection for modern interiors. When placing the plates onto a wall they interact with the background colour or surface making them come alive in their own environment’.

‘Wood you believe it’ is a new pewter collection that takes inspiration from nature and turns it into an everlasting reminder of natural beauty through contemporary design. Pewter is used to create a replica of tree branches to create a hook and light pull series. Inspired by childhood dreams of magic trees growing out of the wall, the hooks combine art with design whilst being extremely functional. ‘Why use a hook when you can use a branch’

‘Against the Grain’ keeps this journey of inspiration through the forest and showcases Tanner’s first hand tufted rug collection. Created for spaces that want to make a statement whilst offering the highest level of luxury, Against the Grain is a series of three hand carved rugs designed to resemble the circles found within trees once the tree has been forested, allowing you to create your own indoor woodland. Each rug is hand made using master craftsman in the United Kingdom.