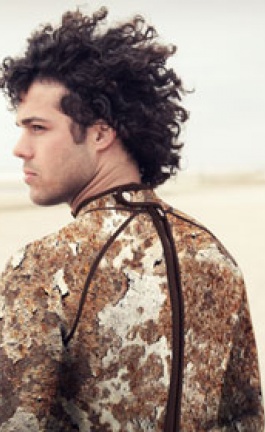 Ebon Heath and his visual poetry

1 May - 27 June, 2009
"Those who want to observe the rise of a new star in the heaven of art – if there is one – here is the opportunity." (Frankfurter Rundschau, Newspaper)
From far away they appear as rectangular, white surfaces. Only at a distance of less than two meters do the paper works by Simon Schubert reveal their full three-dimensional plasticity. In a complex process of folding paper the German sculptor creates lines, angles and even circles raised several millimetres. In the play of light they suddenly appear as views of stately homes with coffered ceilings, long corridors, staircases and halls with mirrors. Schubert's sculptures elude any hasty classification as well. Faces vanish behind long, opaque hair. They avoid one’s eyes, regardless from whatever perspective the beholder is approaching.

Simon Schubert, who counts the writer Samuel Beckett among his greatest influences, deals with existential issues in his work; loneliness, isolation and loss. Above all, the theme of disappearance as a complete physical and psychological erasure is a recurring motif.
For his first solo exhibition at upstairs berlin Simon Schubert has created an accessible room. Ceiling and walls are covered completely with panels of paper folds in which other works of paper are embedded. This ensemble is contrasted by several black-and-white sculptures; hands growing out of the floor, children facing each other in a circle, a girl covered with feathers so that only her silhoutte is recognizable, as well as objects with dark spyholes. And when someone looks into one of these, another room emerges, again folded from white paper...

Simon Schubert (*1976) was awarded the Phoenix-ZVAB Art Prize in 2008. In 2009, he, amongst others, is participating in group exhibitions at the Municipal Gallery in Regensburg and at the CRAC ALSACE in Altkirch, France.