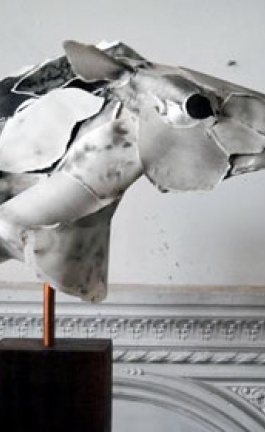 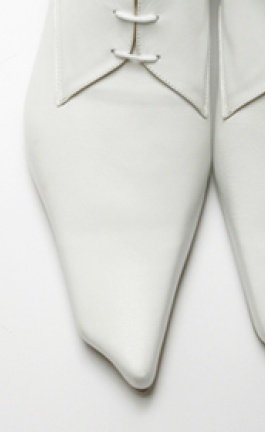 Photo duo Zuza Krajewska & Bartek Wieczorek bring their decadent “trash aesthetic” to Berlin as part of the Photomonth series at Polnisches Institut from September 16 to November 30, 2010. Zuzanna Krajewska and Bartek Wieczorek are a dynamic pair both within the world of professional photography and in their personal lives, which generally means that they spend most of their time together. And yet, they don’t appear to be losing speed as they soar to the forefront of contemporary Polish photography. They manage to deftly escape schematic definitions and artfully trap the viewer between the various layers of meaning contained within the works. These layers span art criticism, a rebellion against conformity, a confrontation between hetero- and homosexuality, a minimalist aesthetic that pans out across a decadent landscape of the 21st Century.

Krajewska and Wieczorek already expressed an ambivalent attitude towards photography in an earlier project, a series called “Urazy” / “Traces”. These photos present bodies, that are in some way damaged - often scarred as a result of an accident or surgery. This is a pair who usually takes pictures of “beautiful, flawless people” for glossy magazines so this project is a quite an amusing experiment. In photographing damaged bodies, the artists draw out the taboo, breaking down the facade carefully built up by pop culture. In the 2006-2008 project entitled “I Just Want To See The Boy Happy”, the duo took its cue from the classic male nude and created a new category of beauty that went beyond the confines of sexuality and gender.

The exhibition taking place in Berlin this September is centred around the symbol of the model in fashion and art photography. This icon of the fashion and entertainment industry has been reduced to a sum of parts, analysed and made into a puppet. Aesthetic and moral values and challenged. The image of a porn star actress is blended with inspirations drawn from Andy Warhol’s early film work. The entire project rises an ambiguous question: “What Do You Want Me to Do? ” - a question once posed by the New York model Bryce Draper. This quote is the inspiration behind the show.

The duo’s achievements are tied in with the fashion world, the realm of models and fashionistas, but perhaps this show marks a turning point for Krajewska and Wieczorek as they cast a critical eye on this superficial environment, pointing out its idiosyncrasies and even ridiculing its unrealistic standards of beauty and behaviour. “What Do You Want Me to Do?” is a survey of films and photographs that blur the line between dreams and reality. It consists of surreal visions that take the viewer backstage and uncover the darker side of this world. This approach is nothing new - but the particular aesthetic and mood of Krajewska and Wieczorek’s works is fresh and inspiring.

Bryce Draper “What do you want me to do ?” - video.
video by Zuza Krajewska & Bartek Wieczorek