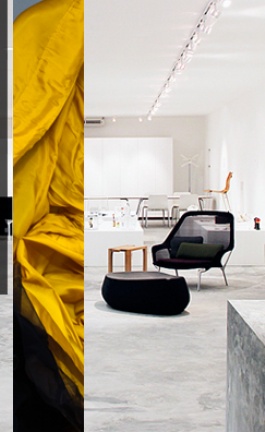 Newly built in the suburb of Bagnolet, a Parisian loft proves it can feel cosy even with an industrial pedigree.

There are certain people who wouldn’t want to live in a loft but, so far, nobody has met them...
A Parisian couple decided to leave the city centre for the dreary suburb of Bagnolet to find the lofty home of their dreams. He is a textile designer for an iconic French brand. She is a costume designer for films. Together they bought their loft as a "concrete block", part of a housing project of similar apartments: The industrial pedigree is owed to the building site on which a sawmill initially stood. With the help of architect Isabelle Rouyer who used Le Corbusier’s “Modulor” to calculate the proportions, the owners designed the interior from scratch.

The main idea was to place 'a block within the block': The kitchen at the centre of the apartment -accessible from different angles- is topped by the bathroom on the superior level. This arrangement puts the utility spaces at the core of the living areas. And cuts the long (16m) and slightly narrow (6m wide) space in half. Naturally the height is where the loft makes its statement: 5 metres, allowing for a solid mezzanine construction upstairs which houses the bedrooms.  The downstairs living area is open exclusively on the side of the neat (60sq m) garden. To invite as much natural light in as possible, the "team" designed windows wall to wall using the full height and achieving a whopping 30 sq metres of glass panelling. Adding air to light, in the summer, the windows at the lower level slide open to their full 6 metre length.

Upstairs the bedrooms are also equipped with large glass panels which beckon the light to creep into every corner of the home. In fact, the -finished in petrol green moquette- en suite bathroom receives natural light on both ends. It opens on to the street at the front of the house but also features an aquarium style glass opening over the tub, which candidly peaks into the master bedroom, letting the view travel over the mezzanine and into the garden.  The sleeping space includes a children's room, complete with glass panels, which almost hangs over the living room. The whole mezzanine is built on massive black steel beams, which were welded by traditional craftsmen and assembled largely on site. The cement staircase which leads to the mezzanine is painted in the same "railroad track" colour.

Although most of the materials used in the loft are brand new (except for the doors and visible brickwork on the ground floor) they convey a “lived in” feel, in tune with the lofty aura. The furniture discreetly points to a 'French countryside meets Manhattan' style.  The general look and feel is a no frills mix and match of designer classics, second hand discoveries and travel mementos like the handmade ceramic crockery - from a trip to Morocco.

It takes a French loft –built in concrete and steel- to flaunt a bohemian soul. As one of the owners remarks: “We wanted to feel cosy even in an open space”.