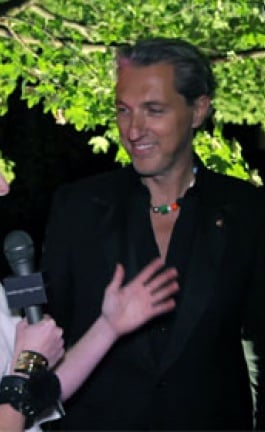 Home interiors are unique; that is what is nice about them!  Each interior reflects the taste of the people who live, breath and enjoy the space.  Such is the case with the renovation of an apartment on one of the main avenues of São Paulo in Brazil.  This renovation had to be dealt with extra care as the original apartment building has been designed by legendary architect Abelardo de Souza, one of the icons of the modernist movement in Brazil.  The apartment building was originally constructed in 1952; fifty-seven year later this apartment was reconfigured entirely with respect to the original structure so it can be occupied by a father and his son.

The entire reconfiguration of the spaces of this apartment where designed accordingly to meet the needs of the father, a merchant, and his son.  The project was carried out bearing in mind the fact that the residence is for two men, each of them occupying a part of it diagonally at the ends of the floor.  The two men at different ages who share this apartment have entirely different needs, despite that fact the architects successfully managed to combine the needs of the two men and create private and communal areas which correspond to their needs.  The apartment was gutted entirely, as a result the newly constructed private areas correspond to the former utility area, which is the son’s sector and the former bedrooms are now the father’s area.  The in-between space is shared by both men and corresponds to the communal space of the apartment.

In the communal area, a concrete built volume structures the storage room, the pantry, the library, the TV-sets, the restroom, and the refrigerators.  This concrete volume also acts as a space divider between the living rooms and the single-flow kitchen.  The communal area is compromised of two independent and spacious living rooms and two dining areas where one is larger than the other.  The original solution of the window openings has been “integrated to the new projected occupancy, creating unusual spatial relations, also internally and externally.”  Both bedrooms are considered master bedrooms as they have their own private bathrooms and the father’s room has its own walk-in closet.

The overall interior design scheme is that of a modern interior; the house has elements of an industrial space without restricting the overall design concept to that of an industrial space.  It includes vintage furniture which has been elegantly combined with other contemporary furniture.  Elements such as the glossy stainless steel covered coffee table and dining table and the matte stainless steel finishes on the furniture make the remaining wooden furniture pieces blend more softly in the overall design. Unique and colorful art, such as sculptures, masks, paintings and photographs create a unique feeling within this apartment.  Light grey mosaic tiling runs throughout the communal areas flooring and a high gloss white flooring finish runs throughout the more private spaces.  Cement surfaces on walls and pillars contrast with the remaining white walls.  A cement grid with voids on the ceiling mirrors and creates an amazing effect for the people who are enjoying food or a drink at the glossy stainless steel tables.

Overall, the reconfiguration of the apartment which is located on one of the main avenues of Sao Paolo, in a building with significant architectural history makes you understand that through its new design scheme the architects have accomplished to create a space where elegance, modernism, an industrial materials such as cement and vintage furnishing coexist in harmony.  Another goal which has successfully been attained is the fact that both father and son can live harmoniously without sacrificing their privacy within this apartment.