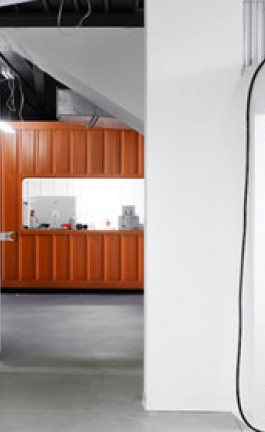 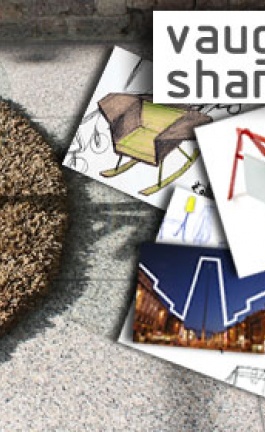 House with Crest is located in the city of Gojo in Kyoto, Japan, where architects Anna Nakamura and Taiyo Jinno of EASTERN design office reveal their talent through the design of this house. EASTERN design office is based in Kyoto and acts in Japan and China. The name of EASTERN implies "architects from the east". They create architecture with "slit”, seeking a design possibility of "slit". Slit is an architectural technique since ancient times; but EASTERN sees "slit" as their design method to change the aspect of contemporary architecture.

The house is located in a block of a typical division of the traditional residential area in Kyoto. The façade of the house overlooks a busy street of four meters wide, while the rear of house or the eastern façade faces the high-rise buildings of 45 meter line up. The neighboring houses are closely built in the south and the north of the site.

The architects designed this contemporary minimalistic house for a single family, but the house also acts as a craft studio for the client who is a traditional craftsman who puts the crest on Japanese traditional clothing. The two story reinforced concrete construction occupies 140.2 square meters (1,509 square feet). The ground floor is compromised of the shop and ample parking area, a separate entrance with a staircase connects to the house which compromises of a bedroom, a living area including the kitchen and bathroom, a workroom and the void / exterior area. The house has a different entrance than the shop through the parking lot. According to the architects they "lifted the one-story house to the sky" to create a calm interior space. It is lifted to 3m above ground level, while the space beneath it serves as a parking lot.

Once more in Japanese architecture we see that when entering or just viewing the first floor plan, one notices a very straightforward house with very few areas than what the average westerner needs. The kitchen and living room are all in one, a workspace for the crest making has been created at the western façade and a bedroom with only a closet is found in the eastern side of the house. On the eastern side of the house one finds a bathroom but the toilet is in a separate room; both are accessible from the communal area.

The three main living areas _ living, workspace and bedroom are semi-divided by the void / exterior which allows ample of natural light to come into the house, but also gives the occupants the opportunity to interact with the exterior environment. However, despite the exterior which divides the areas, each area is accessible through an interior hallway. The one-storied house which is lifted to the sky makes "two outside spaces placed among three inside spaces". The wind and the light of nature gather from the sky into two outside void spaces. And that extends to three inside spaces. The arrangement of the spaces from the western façade of the house to the eastern façade is in such an order as "inside - outside - inside - outside - inside". This arrangement of the space acts reciprocally and intermediately to unify the architecture.

Two street side walls overlap the shop entrance from right to left like the breast of the Kimono. The "breast" interior becomes the shop area and the circular holes that make the cross shape become a pattern which decorate the wall as a crest. It is apparent that the occupation of the owner was the inspiration to this house. The house is designed with the circular holes which are used in crest-making. The 26 circular holes in this cement house are lined up on a cross shape. They are used as windows, allowing air and light to pass through while creating various scenes and sequences at different times of the day. The occupants are happy with the striking movement of the dramatic light while it penetrates the house in an ever-changing motion. The light passing through the circular windows is projected in a distorted yet identifiable circular image, as it moves while it never stops. Occasionally, it may disappear and yet it re-appears!