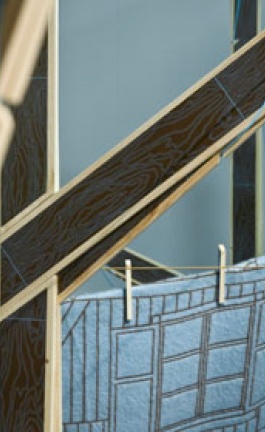 The Ornamented Columns of Michael Hansmeyer make the unimaginable to come true through the use of new technologies and subdivision processes. He creates columns whose forms make you think that they come from a different world. Michael Hansmeyer talks to Yatzer about his computational project.

“It is an attempt to incorporate tools and technologies that can expand the scope of what is possible and what is imaginable and in the best case to create something that is not yet imaginable,” says Michael Hansmeyer the Zurich based architect and computer scientist about this project Ornamented Columns.

His columns look like alien forms, part of a different world, thanks to the subdivision process used to produce them. This highly complex project is the product of computational architecture and explores the use of algorithms to develop an entirely new language of architectural form. What is fascinating about Michael Hansmeyer’s work is that it employs a simple input, an abstract Doric column that is then transformed into a complex column after the multiple divisions of its facet. The details produced are breathtaking capturing in such a way the attention of the viewer.

The project “grew out of a previous project, the ‘Platonic Solids’, that also used subdivision processes to generate complex forms,” he explains. However, while the Platonic Solids remained just a computer project, the Ornamented columns “were designed from the start with a full-scale fabrication in mind''.  For Michael Hansmeyer, the use of groundbreaking technology is an important part of his work he says. Merging technology and algorithms and by using just a simple input like the Doric column he produces columns made out of 16 million facets whose texture is exquisite and which resemble sculptural objects. In explaining why he chose the Doric column as an input he says that he chose so since its order arguably contains less geometric information than the other orders. “As an input, it contains significant information about the form to be generated without over-specifying and thus restricting the output.”

In terms of functionality, the columns and the entire project can be characterized as successful as the newer prototypes can function in an outside environment. According to Michael Hansmeyer “The initial prototype was made of cardboard and had a wooden core. Newer prototypes have a steal core so they are fully load bearing. As the new prototypes are made of ABS plastic, they can also be used in an outside setting”.

The fabrication of the column prototype was carried out at ETH's CAAD group using the university's RapLab. Fabrication assistance was provided by Manuela Koller, Thomas Raoseta, and Edyta Augustinowicz.