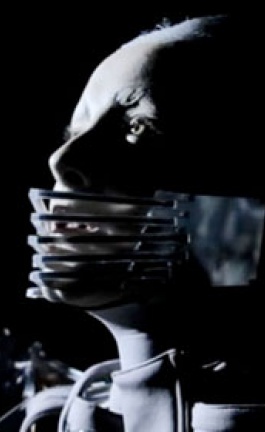 In this year's Salone Satellite, we discovered Siren Elise Wilhelmsen, a young and aspiring designer from Norway whose designs left us speechless and amazed. Siren Elise has only graduated as an Industrial designer from the University of Arts (UdK Berlin) in 2010 and soon founded her own studio.  Yatzer quickly picked up as its favorite design the 365 Knitting Clock which can measure time in a three dimensional way.  Yes, indeed, this exquisite clock is stitching the time as it goes by. Knitting 365 days, 24 hours a day this clock is translating time through the growth of knitted material. Time is manifested in a 3D way as this clock by the end of the year produces a two meters long scarf making in such a way time tangible.

There is no doubt that time is measuring system, which enables us to calculate and organize our lives. It’s an inseparable part of our existence and it’s incorporated in our everyday routine in every single possible way. There is none who haven’t taken time into to account. This smart clock makes the invisible time visible and it’s love at first sight!

Siren Elise Wilhelmsen also presented her mobile seat called Parasitz. This seat is adjustable for seating outdoor and is designed specifically for seating on a tree. Its construction makes it possible to roll the seat together in one direction while in the other it stabilizes and forms a seat. It’s light and handy enabling its user to relax and enjoy spending time close to nature.

You + Me, is a self sufficient lamp, designed by Siren Elise Wilhelmsen and Elisabeth Warkus. This superb green design lamp, which is charged and switched on by pulling the cord uses a dynamo technology and is free from power points. It’s made out of wood and glass and can be hand-held or hung.