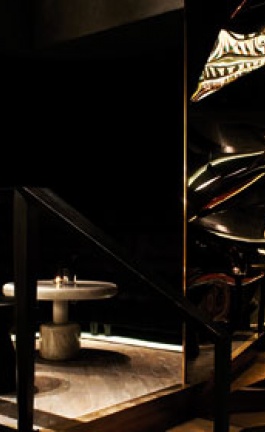 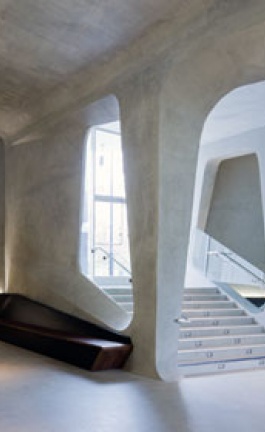 LAMH // Los Angeles Museum of the Holocaust by Belzberg Architects

A manipulation of something that we already know and something that we have a specific sense about has always been at the heart of Daniel Arsham’s work. In his work, the familiar and the surreal, the architectural and the artistic, the alteration of the ancient and the re-evaluation of history are common and constant themes. Defining his work Daniel Arsham explains that he does both art and architecture. “There is a lot of the work that manipulates architecture and causes it to do things that it is not supposed to do,” he explains taking us to his works where the walls look as if they are melting or rippling.

Counting numerous impressive collaborations like the one with Dior Homme, Daniel Arsham takes architecture and art to new levels. “A number of years ago, when I was in LA, Hedi Slimane, the designer at the time, asked me to create an installation for the fitting rooms. When I started the project the idea was to manipulate the surfaces of architecture and the space,” he says. Having to consider various practical and code issues because the space was open to the public Daniel hired a friend of his Alex Mustonen, his later collaborator for their Snarkitecture practice, to help him on the Dior project.  It was then that their collaboration officially started. “Because is was an art work integrated into a building that was being constructed there were various considerations beyond going into a space and placing an art work. So Alex helped me on that and Snarkitecture sort of came out of that experience.”

''Snarkitecture is a collaborative practice operating in territories between the disciplines of art and architecture. Working within existing spaces or in collaboration with other artists and designers, the practice focuses on the investigation of structure, material and program and how these elements can be manipulated to serve new and imaginative purposes. Searching for sites within architecture with the possibility for confusion or misuse, Snarkitecture aims to make architecture perform the unexpected.  Snarkitecture is represented by Galerie Emmanuel Perrotin.''

When combining the two disciples, art and architecture, the result is visually powerful. His drawings as he says are hypothetical. “They are not proposals but imagined scenarios. I think that architecture in a lot of ways can become quite sterile because of these real practical facts that one needs to consider when building a space and these facts can become overpowering''. To him, the combination of his practice with that of architecture gives to his work  a little bit of a lighter, less conservative air.

The concept of ‘play’ is to Daniel Arsham extremely important to his work. He goes back and remembers that one of the first shows he did with art dealer, Emmanuel Perrotin, had the title: Playground. “I think it was also a word play about the ground and the surface. That show, had a number of works that had figures, which were embedded in the architecture, that were wrapping themselves and were falling from the ceiling.” Arsham in this show also presented on the wall a curtain which gave the impression of wind blowing behind it. It is this constant manipulation of something that we have a specific sense about that makes his work so powerful. “For example we understand that a wall has certain basic qualities. We know how it feels like, we know it is meant to support the roof that is above us, we know it’s hard and by disrupting those qualities while still maintaining the physical attributes of the surface, the work appears as it has been made out of the same material and thus the possibility of its form has been manipulated,” he explains. Works of his like the Corner Knot or the Sheet which modify unravel this interesting concept of play. “We don’t expect them to move and when their scenarios appear to do so, it’s quite a disturbing thing to look at''.

In his newest drawings which incorporate ancient Greek sculptures, presented in Gallery Perrotin, Arsham works in a similar way. He was in Athens for the Hellenic festival and at the time he was visiting many of the museums and he was taking pictures of some of the broken heads. When he came back to New York he manipulated architecture in the drawings by creating scenarios that were in a way impossible. “I started to play with these heads and added forms to them. I repainted them in a way that they appear as if they could have been sculpted like that initially so in a way it was a play with history. It’s an alteration of history … like a parallel history”. Merging the modern and the ancient, Daniel Arsham’s works are “proposals for some sort of way of reimagining history as a non-linear time sequence”. The Pixel Cloud, similarly, is “a literal translation of the two dimensional images of clouds which I took to three a dimensional form”, he explains.

Daniel along with Alex is now working on a large project in Miami for a new baseball stadium. “ We are taking the letters that were on the outside of the former Miami Orange Bawl stadium, which has been demolished to make a new one and we scatter them around the plaza of the new stadium where it’s a sort of reinvention of these forms so that they don’t spell the word: Miami Orange Bawl,” Daniel explains.  In this way, what Snarkitecture wishes to accomplish, is for people who know the old stadium to remember those letters and their experiences based on that history. As for the people who have never seen the stadium, Snarkitecture wishes that they would have a completely new experience. The stadium will open in April 2012.