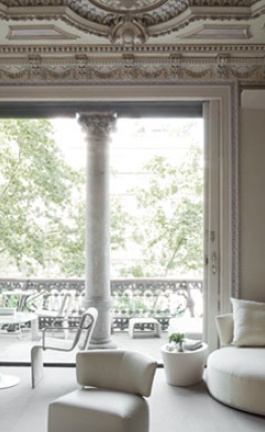 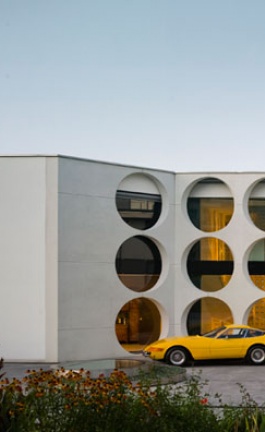 The O-House by Philippe Stuebi Architects

We’ve seen Studio SKLIM’s work on Yatzer before; however, their work only keeps on getting better!  We’re thrilled to present you ‘The Tastings Room,’ on Marina Square in Singapore.  ‘The Tastings Room’ is a superior combination of French/Italian Bistro cuisine and a wine cellar in a single area.  The Tastings Room is located at the heart of Singapore’s Central Business District on Marina Square where the highly acclaimed hotel Marina Bay Sands, which we previously presented on Yatzer is also located.  The restaurant’s vision was to refresh people’s perception on the wine and food culture in Singapore, thus making it accessible and reasonably priced.  Studio SKLIM translates the restaurant’s vision and the overall spatial experience sandwiching the crafted black volumes between two layers of industrial aesthetics: exposed ceilings and the concrete screed floor, to juxtapose/merge chic and sophisticated divergent aesthetics all reasonably priced.

The project asked for the interior refurbishment of the 137 square meter commercial property whereby the programmatic composition called for three individual spaces:  the Wine area, the Bistro area and the Wine/Bistro shared spaces.  The total floor area of 137 square meters has been divided percentage-wise into 7% for the ruby red wine cellar; 47% for the Wine/Bistro area which also includes the private function rooms, the storage staff area and the central bar and circulation space. The remaining 46% of the Bistro includes seating space and the kitchen.

Studio SKLIM deployed a program to provide for the most flexible layout design; this called for a U-shaped layout calling for three main factors: entry/exit points, shared functions and the main circulation.  The space was divided in two with the help of the Central Bar which has been positioned in the middle, fulfilling the needs of both the Wine and Bistro segments, as well as providing the point of sale for this establishment.  The Central Bar is a very stunning volume; additionally it adheres to practical features such as hiding services, supporting service counters, anthropometrics and sight lines.  The black hovering pointed form of the Central Bar houses a giant light fixture while simultaneously accommodates the bar’s wine racking needs.

Studio SKLIM has drawn inspiration from the aesthetics of the dark wine bottle and antique weaved wine basket holders; this is clearly reflected in the contemporary interior design scheme.  The outer shell of these volumes adopts a series of black diagonal tiles while the interiors are inspired by the “hidden” flavours of wine, taking on singular hues for rooms such as the red wine cellar and the yellow kitchen.  The outer shell of these volumes - the black diagonal tiles add a mystery and a classic finish to ‘The Tastings Room,’ creating a chic and sophisticated interior atmosphere.  On the other hand, the concrete screed flooring in a concrete hue tone sets an industrial feeling which is also reflected from the floor to ceiling as the ceiling has been left exposed.  Air ducts and vents run across the classic and sophisticated Wine/Bistro thus providing an industrial feel and making the space somewhat more attainable to all; thus achieving the restaurant’s vision - to refresh people’s perception on the wine and food culture in Singapore, thus making it accessible and reasonably priced.

The “hidden” flavours of wine take on particular hues for rooms such as the red wine cellar which is part of the U-shaped band.  The wine cellar also known as the “Cabinet of Wine” is a ten-square meter area in the restaurant’s Wine/Bistro section.  The “Cabinet of Wine” is a collection of new and old world wine, along with its accessories like decanters, preservation devices and wine glasses, in reference of the “Cabinet of Curiosities”.  The juxtaposition of these articles on curved shelving makes indexing visually more legible thus encouraging easier comparisons, experimentation and sampling of the wines; this indexing system encourages customers to purchase wine.  On the other hand, the yellow kitchen also reflects the hidden flavours of the wine which have been represented through the yellow colour scheme.  Both red and yellow as colours compliment black perfectly which has been used on the diagonal tiles as the outer shell of the U-shaped volumes.

In the Wine/Bistro section the project called for a private dining area with a maximum capacity of 16 people.  The identical function rooms allow a singular space to be converted through a foldable looking glass; the all-black and all-white rooms provide for a unique exclusive fine dine Asian yin-yang balance to an essentially European gastronomical experience.  On the other half of the U-shaped band, the Bistro seats 48 people while an additional 20 can dine al fresco.  Hovering Tom Dixon Copper Shade suspension lights add that touch of glitz and glam to the Bistro dining area.  The selection of the specific lamps is quite smart and to be honest they actually fit very well there. The Tom Dixon Copper Shade lamp includes both the yellow and the red hues from the wine ‘flavors’ as well as the colours used in the ‘Cabinet of Wine’ and kitchen areas.  Additionally, they compliment the black diagonal tiling for a sophisticated contemporary interior.

All in all, Studio SKLIM has done a superb job in portraying the restaurant’s vision - to refresh people’s perception on the wine and food culture in Singapore, thus making it accessible and reasonably priced.  They effectively translate the restaurant’s vision and the overall spatial experience by sandwiching the crafted black volumes between two layers of industrial aesthetics: the exposed ceiling and the concrete screed floor, to juxtapose/merge divergent aesthetics which are chic, classic and sophisticated.