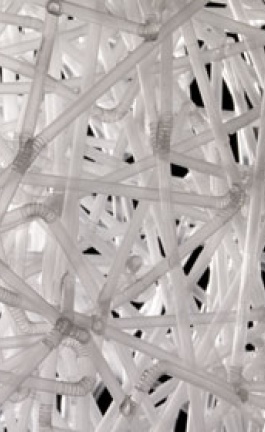 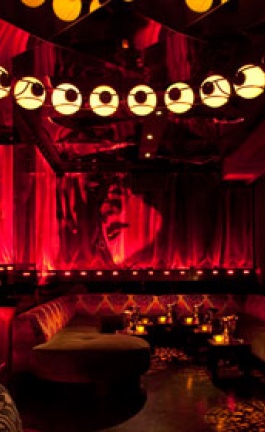 Sometimes we get fancy gift-wrapping and a somewhat expected gift which does not accompany the exterior wrap!  Although the best alternative is to try to look for the content and not for the fancy wrapping; but what happens when wrapping and the content are equally weighed?  I guess that’s the best formula!  Such is the case with Neil Barrett, fashion designer and AquiliAlberg Architects.

Recently, Neil Barrett cooperated with Milan-based architectural and design studio AquiliAlberg for the presentation of his Milan Autumn-Winter 2010 Menswear Collection // ICONIC HYBRID.  The designer chose two of AquiliAlberg’s sculptural installations to be set as the background for the show.  ICONIC HYBRID emphasizes the designer’s specific style who tends to cut garments in various shapes and forms and then merges them to create new patterns as a result he fashioned HYBRIDS. The achromatic colors used on Barrett’s clothing spectacularly bonded well with the runway setting.  Shapes of all types and sizes made pieces of the garment.

Set against the sculptural setting which was designed by AquiliAlberg, the collection portrayed the contrast in how architecture can influence fashion.  The installation sets forth for an innovative interpretation of space, (the installation is a variation on the design studio's work for “The Fragile City” exhibition at Triennale di Milano).  The “sliced surfaces generate a complex, yet controlled volume, obtained through three-dimensional digitalization”.  The achromatic colors used by the materials which constitute the clothing of this collection have been also used for the installation.  The complex, three-dimensional digitalized shapes of the installation can be easily spotted on the clothing as well in proportional sizes; leaving the crowd with various interpretations between the architectural interior and the setting.

The white runway with the black projection line created a path and a continuation which subconsciously led the spectator following the model to the end of the runway and back without taking their eyes off the model not even for a second.  The shapes used give the installation as well as the runway a spatial complexity.  The linear approach creates a kaleidoscopic feel which differs according to the physical position.
Neil Barrett and AquiliAlberg have carefully shown the inspiration which fashion draws from architecture.  Barrett has been fascinated and inspired by architecture, interiors and the interrelation between these areas and fashion.  In 2008 he opened his own Concept Flagship Store in Tokyo, designed by Zaha Hadid, where the architectural use of curves and layers is visibly strong.