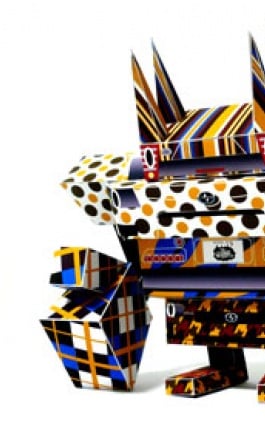 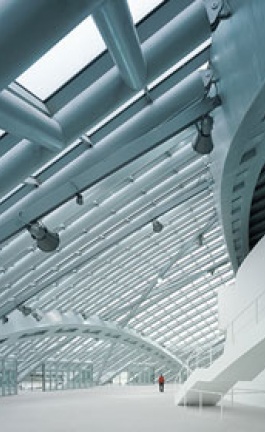 April 22 - 27 / Salone Del Mobile, Milan
Love Design is a project that explores the multifaceted relationship between design and positive feelings such as affection, desire, pleasure and romance, but also jealousy, distance, separation and pain. Published by Daab, Love Design the book presents a selection of unusual products, objects, graphics and textiles specifically designed to enhance (or distort) our pleasurable sense of togetherness in every possible (and impossible) way. During the Milan Furniture Fair 09, Love Design the exhibition presents the works of 20 outstanding designers taken from the book. The selection includes new products and special editions, in categories like fine textile, sound wave jewelry, blushing lighting, erotic tableware, lover’s furniture and more surprising delights. This exhibition questions the very meaning of the word ‘love’, the beginning and the ending of what binds us together and tears us apart.

GEORGIA by Andrea Knecht
Georgia designed by Andrea Knecht is part of the Lovetoy Collection, a series of love objects imagined by women for women as an alternative to the traditional codes and conventions of the traditional sextoy industry. Georgia is a lovetoy for women imagined as an extension of the finger. Its shape evokes the flower ‘Calla’ and was made in remembering of the artist Georgia O’Keeffe. Made of fine silicon 100% hypoallergenic.
Andrea Knecht, Swiss/Brazilian, born in 1971, lives and works in Lausanne, Switzerland. Ecole Cantonale d’Art de Lausanne (ECAL), Master in Industrial Design. Graduated in 2005 (first woman). Since 1998 Andrea has been working on all aspects of product design, from manufacturing to distribution. She has developed many innovating material techniques, most notably using silicone and rubber. In 2000 she collaborated with the world famous Campana brothers in Sao Paolo. Her double nationality reflects in her work : the Swiss disciplined purity of lines and Brazilian risk taking. Recently Andrea was internationally noticed by both the media and the profession with her revolutionary collection made of hay and latex.

HUM AN MILK CAMEO NECKLACE by Cécile Fricker Lehanneur
Human Milk Cameo Necklace by Cécile Fricker Lehanneur is made of hand blown glass, gold and ivory made of human mother milk. The concept is that the mother’s milk remaining once she stops breast feeding is collected to produce the material that will become the baby cameo for the jewelry she will wear as a symbol of love for her child. The technique is developped by taking a 3D picture of the baby’s head, scan the image, then the mother’s milk is transformed in milk ivory blocks of about 3cm2. A computer program finally sculpts the cameo which is then hand finished for ultimate detailing. Hand-blown Murano glass will seal the cameo in a glass bubble and
mounted on a gold chain.
Cécile Friquer Lehanneur is a jewlery designer, she lives and works in Paris, France

8EME CIEL by MATALI CRASSET
8th Heaven designed by Matali Crasset is part of the Lovetoy Collection, a series of love objects imagined by women for women as an alternative to the traditional codes and conventions of the traditional sextoys. 8th Heaven is a lovetoy made of very fine silicon (100% hypoallergenic) with delicate metal spheres injected inside the soft material, creating a natural and soft vibration when in use. It functions as an extension of a woman’s hand, a physical extension of a woman’s fantasies. Comes in six different colors.
Matali Crasset. After graduating from École National Supérieure de Création Industrielle in Paris in 1991, Matali Crasset worked with the designer Denis Santachiara in Milan and with Philippe Starck in Paris. In 1997 she received the Grand Prix for design from the city of Paris and opened her own design studio in 1998, focusing her attention on domestic rituals and the creation of objects and furniture for Artemide, Authentics, Cristal Saint Louis, DIM, Domodinamica, Domeau&Peres, Dornbracht, Edra, Lexon, Moeve, Orangina, s.m.a.k. and Thomson. Matali lives and Works in Paris, France.

POWERED BY JIMMYJANE by Arik levy
Powered by JimmyJane, design by Arik Levy is a beautiful wooden jar with an extractable vibrator slid inside a hole made on the side of the jar. Arik develops here an experimental work about the relationship we have with objects and the way we interact with them. Powered by JimmyJane talks about power, penetration, interaction, action or reaction as well as the natural and the superficial, rawness and technological advances. This idea was to turn objects, here a wooden jar, into an external stimulation vibratror that enables a totally new kind of interaction. The sextoy is no longer a necessary search for orgasm but also and simply an object for pleasure and/or emotional comforting.
Arik Levy is a founding partner of the multi-disciplinary design studio Ldesign and has worked across a broad range of projects including product design, industrial design, corporate identity, interior design and stage design. Born in Tel Aviv, Arik graduated with a distinction in Industrial Design from the Art Centre of Europe in Switzerland and subsequently took part in several design exhibitions in Japan. Returning to Europe, Arik applied his innovative concepts and installations to contemporary dance and opera scenography around the world. Winner of many awards, his work has also been exhibited in numerous high profile fairs, galleries, museums and exhibitions. Arik
works as both

BONSHOMMES & BONHEUR by Florence Jaffrain
Bonshommes designed by Florence Jaffrain are variable in size, between 2 and 15 meters,from the giant to the child. They mingle and embrace each other, they can be alone or together, on top of each other or linked. A reflection on our relationship to ourselves and others, Bonshommes offers an infinite variety of possibilities and combinations. Made of felt and organic mousse, topped with mesh or polyester, Bonshommes inspires the simple form with soft lines, tender like a sweet face to face. A seating, lying or embrassing time for yourslef to indulge in. Bonheur is part of the same modular seating family, friendly and loving.
Florence Jaffrain is a product designer based in Paris, France. She revisits everyday objects by assembling materials and playing with forms and light to suggest new kinds of objects that are simple and playful.

Waveform by Sakurako Shimizu
Waveform designed by Sakurako Shimizuis born out of the shape of digital sound waves. Waveform Series consists of laser-cut visual representations of various sounds, rendered in silver and other metals and presented as wearable pieces. For this particular Love Design project the source of sound is “Cet Amour”, a poem by Jacques Prévert. The waveform of the poem, read by French actress Jeanne Moreau, was incorporated into necklaces and rings. The installation, beside jewelry objects, consists of the actual soundtrack. 24K Gold laser-cut.
Sakurako Shimizu is a jewelry designer based in New York.

1+1 by Frédérique Daubal
1+1 (LoveMe Before, LoveMe After) is a set of two pyjamas for her and him, 100% cotton with very fine digital printing of two human bodies. One set presents a couple together, the other a couple separated. Frédérique Daubal develops here a graphic play between textile and the body, between emotion and object. A subtle game on the image we have of ourselves and the couple we live (or not) in.
Frédérique Daubal is a multidisciplinary designer, focusing on graphics and textiles. She lives and works in Paris, France

DUOBERGÈRE by Sofie Lachaert & Luc d’Hanis
Duobergère designed by Lachaert & d’Hanis is two armchairs grown together, legs entwined, two cushions as one. Confusing piece of furniture, stirring the imagination.A bergère is fitted with a loose, but tailored, seat cushion. This chair is designed for lounging in comfort, with a deeper wider seat than that of a regular fauteuil. Material: wood and fabric cushion. Dimensions H110x120x60 cm.
Sofie Lachaert & Luc d’Hanis develop and realise many extraordinary objects as well as poetic, theatrical installations, both for their galleries (Tielrode, Ghent) and elsewhere (Droog Amsterdam). Questioning function and representation, their work communicates with the human body, the room, the environment. They work in a pure, minimalist style. Through subtle interventions they give everyday objects a new significance, an unexpected beauty. In the no man’s land between fine and applied art they create a slightly surrealistic, parallel world where there is a place for silver chip forks, useless crystal bottles, a noble sugar cage. Objects as art, art as an object.

VESSEL ONE by Adam Farlie
Vessel One designed by Adam Farlie is a bed that asks whether an object can become a substitute for a person. Vessel One was created to replace absent people through sound. This object is always listening, constantly recording the sounds made by those who have lain on it. Designed as a sensitive vessel that captures and contains the ‘audio-memories’ of past occupiers through sound. When Vessel One detects silence, it plays back sound memories at random. Sounds are recalled in the bed in the same way a Memory pops into the mind. One might lie in bed and hear past intimacies, infidelities or conversations from a number of days, weeks or even years ago.
Vessel One is made of Corian.
Adam Farlie graduated in 2008 from the Design Academy Eindhoven. He specialises in emotional design. He lives and Works in Eindhoven, The Netherlands.

Meta morphose Spoons by Alexa Lixfeld
Metamorphose Spoons designed by Alexa Lixfeld is a one-of-a-kind collector’s item, an installation of 13 unique silver spoons.. Some of them develop into forks. The becoming of the spoon stands for the developing female, while the transforming into the fork stands for the developing male. It is a visualization of developing gender realized in fine silver cutlery.
Alexa Lixfeld / “i produce culture,” says alexa lixfeld.`cross-culture`would be better. whether it`s a project in which she tries to use concrete as an alternative for ceramics in household products, a perfume, fooddesign, an eat-art performance in which the participants ladle soup from a plate with a 1,4 meter diameter, or a socio-economic development foundation she set up in sri lanka, to help children and rual women - she often seems to go for a challenge that others think impossible. in creacete™ she combined her pioneering experiments with concrete in the field of tableware with the ultimate in finishing, the traditional japanese urushi lacquering technique from wajima, while leaving the contrast open and visible. alexa lixfeld studied at köln international school of design, university of applied arts pforzheim and design academy eindhoven, the netherlands. she works in hamburg since 2006, running her own studio

QUIZAS-QUIZAS by Pupsam
Quisàz-Quisàz by PUPSAM is a double stethoscope aimed at simultaneously listening to your own heart and the one of your beloved. Made of chromed silver, comes in pink and blue or red and blue. Limited edition.
Pupsam is Thomas Libé and David Puel, two ecclectic product designers specialising in a wide sprectrum of ideas, from photography to product design. They live and work in Paris, France.