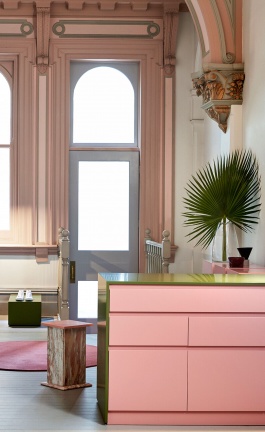 Let there Be (Nordic) Light

Hauser & Wirth in New York presents “Memory Ware”, an exhibition of late American artist Mike Kelley’s series of the same name. Featuring almost two dozen sculptures and mosaics, most of which are on loan from museums and significant international private collections, the works on display explore the vagaries of memory as well as showcase Kelley’s extraordinary talent in reusing, re-purposing and re-contextualizing materials and ideas.

In his career which spanned over 30 years, Kelley worked on every conceivable medium—from painting, sculpture and photography to performances, music and video—drawing inspiration from American pop culture and appropriating modernism's structures to conflate high and low culture, mush up the sacred and the profane, and critique the prevailing aesthetic. Tackling themes as diverse as class relations, contemporary sexuality, repressed memory, religion and politics, with incisive erudition and self-deprecating humour, Kelley is considered one of the most influential and pivotal American artists from the past quarter century.

Comprising more than 100 works created between 2000 and 2010, Kelley’s “Memory Ware” series borrows its name and aesthetics from folk art found in black communities in the American South and Victorian Britain in which bottles and other vessels were decorated with sentimental keepsakes such as buttons, beads and charms, embedded in a coating of clay. As Ralph Rugoff, director of London’s Hayward Gallery, explains “given his existing interest in remembrance and in re-purposing materials with prior histories [see for example, ‘More Love Hours Than Can Ever Be Repaid and The Wages of Sin’, one of Kelley’s most famous works from 1987 featuring a mess of used rag dolls, stuffed animals and blankets strewn across a canvas], as well as his long-term engagement with the aesthetics of craft and folk art, Kelley recognized in this find [at a Toronto antiques fair in 2000] the possibilities for developing new works that deployed the memory ware aesthetic towards very different ends”.

“Memory Ware Flats”, the series’ two-dimensional wall pieces on display, dazzle the viewer with their mind-boggling density made out of thousands of tchotchkes—pins, buttons, keys, coins, bottle caps, pendants and even screws, bought by the handful at thrift stores and flea markets—cemented in rectangle canvases of grey tile grout. For Kelley, memory is a stream of tiny particles, disconnected morsels of information that only sometimes add up to make clear sense.

Although from a distance, Kelley’s ‘Flats’ resemble abstract art paintings, straddling pointillism and abstract expressionism, on closer inspection, as its constituent jumble of trinkets come into focus, they almost turn into a craft project of kitsch sensibility. This perceptual shift from high to low art and vice versa which Kelley has ingeniously achieved in these works reveals his belief in the pivotal role of conventions in generating and framing different meanings but also underpins the artist’s rejection of the idealist notion that objects, including works of art, have inherent significance or value.

Τhe show’s freestanding sculptures, some sharing the same mesmerizing decorative busyness as the ‘Flats’, others sporting a more minimal sensibility, provide additional layers of meaning. Take for example “In Memory of Camelot”, featuring a tiny figurine of JFK Jr. that reproduces a charged scene from his father’s funeral, a framed newspaper cover announcing his death in an airplane crash and a bejewelled urn, it entwines the deaths of father and son in the annals of our collective memory.

Quite different in conception and form but just as nuanced, “Aerodynamic vertical to horizontal shift”, a concrete blob resting on two wooden sawhorses, replicates a segment of his 1999 “Frame and frame” installation (a project that heavily informed his “Memory Ware” series), a miniature replication of the Chinatown wishing well, a 1930’s sculpture by Henry Hong Kay Liu in downtown LA that in turn is a miniature replication of the Seven Star Cave in China. Accompanied by an audio of planes taking off in order to compensate for the dynamic thrust loss from having been shifted from a vertical to a horizontal position, this third-order replica not only acknowledges the fluidity of memory but also explores the discordant relationship between meaning and form.

With an upcoming publication of a book by Hauser & Wirth Publishers documenting the entire “Memory Ware” series, there hasn’t been a more fruitful time to showcase Kelley’s superb craftsmanship, mastery in composition and conceptual ingenuity but above all his willingness to use these talents to subvert our perception of both artistic norms and his own work as an artist.