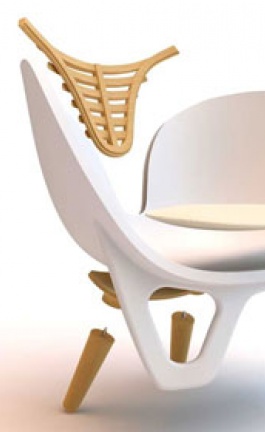 Selfridges is lifting the veil on its next big centenary celebratory moment, which this time focuses on the future rather than the past – fast-fowarding 100 years exactly.

Selfridges has teamed up with leading creative agency Wieden + Kennedy London to create ‘Future A-Z’, 26 ‘IT’ products for 2109, a special window installation which looks at the life we may lead through the essential objects that may become commodities in the future.
The installation launched officially on Friday 3rd July in Selfridges’ Wonder Windows wrapping the Concept Store situated within the store’s Wonder Room, the ultimate destination for precious and extraordinary products. The ‘Future A-Z’ is part of the store’s wider window scheme, simply called 2109, that launches on the same day. Whereas the main 2109 window scheme looks at more complete lifestyle scenes, the ‘Future A-Z’ focuses on specific products that may revolutionise our current lifestyle and bring it ultimate comfort and pleasure.

The ‘Future A-Z’ also offers a unique opportunity: a competition open to the public to design a product for inclusion in the alphabet. This is the first time the world-famous Selfridges windows and its team will create and display a concept generated as a result of a public competition.

The ‘Future A-Z’ installation consists of 26 fantastical new inventions designed for our life to come: from the stupidly clever A for Airbag Cycle Helmets through to the darker dimension of D for Designer Organs, and one, ‘T is for Timeless’, will be recognised by all…

‘We wanted to come up with something that reflected Selfridges,
the ultimate pleasure palace, in the future.
The idea allows us to show a collective view of the future with a series of 25 ‘crazy sensible’ future products.”
Tom Seymour, David Bruno and Sophie Lewis ///The creative team on the windows

It is the letter X which the general public will be invited to pitch for, simply by sending their idea drawn on paper either by postal mail or by applying online by 26th July. The winning idea, as selected by a panel of creative experts and Selfridges, will be made to measure and exhibited from 8th August until the end of the month. The panel will include Dr Frances Corner – Professor of Art and Design Education at the London College of Fashion and Patrick Burgoyne – Editor of Creative Review. The X Idea Competition winner will have their name featured on the window and win a £500 Selfridges gift card.

Sarah McCullough, Selfridges Windows Concept Manager says: “We always try to push the boundaries of what our windows can show the world. Working on this new window concept with Wieden + Kennedy has allowed us to break new ground yet again. We are delighted to offer someone who would normally be watching our windows from the street, the opportunity to play with them get their idea materialised.”

Tony Davidson, Executive Creative Director Wieden + Kennedy says: “As the industry evolves, so should opportunities to do projects beyond the normal remit of an agency. Too often we are pigeonholed by clients who believe we can only do one thing. It is a privilege to be given the chance to do a project like the ‘Future A-Z’ by a daring client who believed in us and consequently gave us a chance to execute ideas beyond traditional advertising.”

X Idea competition:
Entrants can download the entry form or by completing their design on a postcard available from the Concept Store in the Wonder Room on the ground floor of Selfridges on Oxford Street.
Designs can be submitted via the entry box at the Wonder Room, Selfridges London, sent by email to ideaX@wk.com, or by post to: Idea X Competition, Wieden + Kennedy, 16 Hanbury Street, London, E1 6QR.
The competition closes at 6pm on Sunday 26th July.

A is for AIRBAG HELMET
Instantly inflates on impact providing 360 degree protection for any cyclist. Do not wear in bed.

M is for MOON FLOWERS
Harvested from the Selfridges lunar fields. Flowers arrive fresh every day. Gravity-proofed and naturally luminescent. Do not water.

P is for PORTA-WOMB
Retain your figure throughout pregnancy. Unisex design. Convenient cord tidy. Ask for details at our Pop-Up Surgery.

H is for HAPPY FRUIT
100% natural antidepressant. Packed full of serotonin, the natural antidote to S.A.D., global sadness and other depressive disorders.