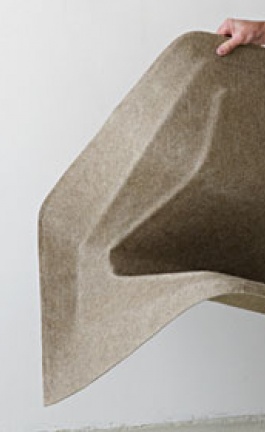 The Hemp Chair by Werner Aisslinger

The first collection of Studio Vit is called ''11 boxes'' and was presented in Salone Satellite during Milan Furniture Fair 2011. The creative minds behind Studio Vit are two Swedish designers Helena Jonasson and Veronica Dagnert. Helena has worked in the furniture industy since graduating with a degree in industrial design, and Veronica has a background in fashion and a Masters from Central Saint Martins in London. Both live and work in London.

''11 boxes is a typology of storage units based on the idea of an archetypal box, each one distinguished by its shape and structural elements. Like characters in an alphabet, the boxes can be used on their own or grouped together, in the same way that single letters make words.  A playful and changeable collection, the boxes can form infinite unique compositions depending on the situation, available space and storage needs. Made from solid maple, each unit is equally finished on all sides and thus can be positioned anywhere in a room.''