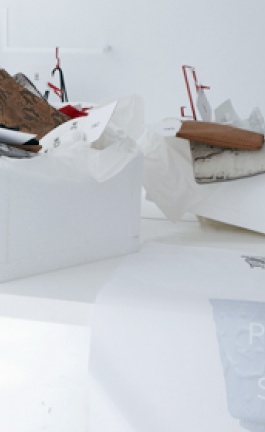 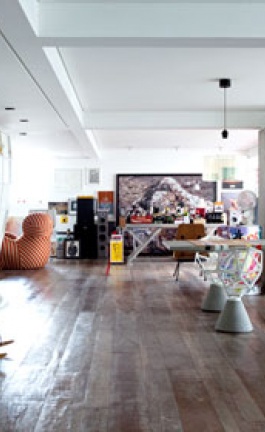 Örsta Gallery in Kumla, Sweden is surrounded by rolling fields, an old farmhouse and the gallery owners house. This sets the stage for quite a contrast in aesthetic and age.  A hill was created as the foundation for the gallery to isolate the building from the unusually moist soil of the site.  Subtle curves have been introduced to the roof line and mirrored in the floorline to follow the curve of the hill; this tricks your eye into thinking the facade of the building is curved as well (even though it's a straight facade).  The scale of the building is also misleading as it is punctured with overly tall windows and doors; stretched from the ground line to the roofline.

What's fascinating about this particular design is the reflective sparkle of the facade.  A basic white background was dressed up with three tons of reflective glass beads (implemented while the surface was still wet).  Artist Mikael Pauli created this effect so that when a light source hits the glass, the building appears to glow as if lit from within.  This is particularly visible at night; when a car's headlights make contact with the building surface, there appears a sudden bright flash.

Designed by the team at CLAESSON KOIVISTO RUNE, the building's interior mimics the exterior as it is bright and white.  Because the floor level is elevated from the ground line, the floor seems to rise just above the surrounding crops as an intentional design directive.  The interior 350 sqm floorplate is divided into four galleries organized by a central circulation path.  Window openings align with partitions to create the appropriate site lines and light penetration without disrupting the art viewing experience.