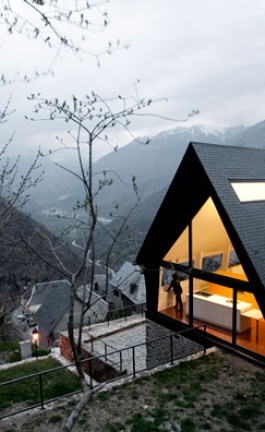 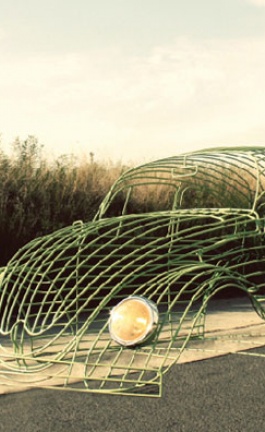 An Iconic Beetle Becomes A Sculpture

Situated on the 56th floor of the Montparnasse Tower, the Ciel de Paris restaurant spanning a whopping 400 sq.m makes an awe inspiring amber glowing statement on the Parisian skyline. At once, incredibly chic, welcoming and ethereal, like a Barbarella set, Ciel de Paris surrounds you like a bubble, encompassing the sleek 1960's space influenced aesthetic. The skilled composition of the sombre reflections transform with time to create the perfect space to while away the hours waiting to experience the City of Lights like never before. Stepping into this restaurant is like floating through space where the breathtaking view from the huge bay windows is juxtaposed with the Star Trek meets stylish bars seen in 60's French Truffaut films feeling throughout. The whole ambience lends itself to a world of go-go dancers shimmying away atop tables cleverly mixed with incredible modernity aimed at the chicest of tourists and locals alike.

The sleek modern interior design by Noé Duchaufour-Lawrance sets the stage for the accompanying furniture pieces which sit organically in fluid surroundings. Smooth flowing walls nodding seductively to retro references dance with modernity to produce something that is very special indeed. The lighting, designed especially for the project, in partnership with Artemide, resembles a cluster of planets or even the surface of the moon. This lighting arrangement, which can’t help but remind one of evenings spent gazing at the skies above, is then artfully reflected in the subtle circles in the made-to-measure Taî Ping carpet and the bar. The bar, strongly resembling a spaceship, like many of the fittings, is backlit by indirect lighting, creating a halo of light that is then projected onto the ceiling. Further orchestrated touches in the grey satin finish seating, Stolz leather interior and wooden benches which add a natural touch bringing the whole scheme back down to earth, all add to the unraveling of layers of genius in the overall design. All in all, this is a space full of surprises that yearns to be explored by the eye.

Further elements of the design's focus are on quality light and mood. The grey velvet paint on the walls, corian table tops, Stolz leather and different tonal dimensions mesmerize even more when light bounces off the varying surfaces; strengthening and transforming perspectives. Like the design itself, the overall mood is subtle and far from confrontational; provoking a string of reactions, lasting as long as you stay in a space where shapes and colours communicate and caress each other. Spending any amount of time in this space is an experience in which light is encouraged to bounce around the room and surround you. Then there is the ever changing light coming in from outside which once night falls opens up the delicate twinkling of Paris’ skyline and the enchanting panorama changes once again.

Noé Duchaufour-Lawrance knows style having worked with prestigious brands such as Air France (in partnership with Brandimage), Paco Rabanne and Yves Saint Laurent. Anyone who's visited the venue that began his career, the restaurant Sketch in Soho, London (2002), will already understand Duchaufour-Lawrance's special talent for creating pioneering designs. Ciel de Paris comes from a designer at the pinnacle of his career and it comes as no surprise that this particular designer has a double passion for materials and shapes. This is embodied by a double-faceted course of studies: first a course in Metal Sculpture (at the Ecole Nationale Supérieure des Arts Appliqués et des Métiers d’Art), then Design at the Arts Décoratifs in Paris, elements of his career definitely evident in this latest venture. Working also with Yorgo Tloupas (Visual Identity), he has  delivered a sumptuous space that makes you yearn to be engulfed in its ambiance, wine in hand gazing longingly at that spectacular view.  In Ciel de Paris, this designer's aim of creating spaces that establish an emotional bond with what also lies outside,  has been more than fulfilled.

This is more than a restaurant, more than an exceptionally designed space; Ciel de Paris feels like a living breathing organism with a strong emotional identity. It's light filled, sensual and as seductive as space travel. There is without a doubt no better space from which to enjoy the magic of Paris, and equally no better city from which to explore the magic of Ciel de Paris.