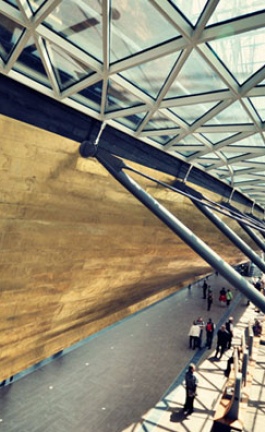 Giving great importance to design and aesthetics, each Fasano resort has that one-of-a kind approach which we so long for. Amongst our most favorable is the Fasano Boa Vista Hotel, a 750 hectare complex in Porto Feliz, 100km from Sao Paulo, Brazil. Here we can see the yearning that has covered all our souls for the past 10 years for the ideals of the 1950’s & 60’s. It is not just about Mad Men, it is a longing that this hotel has successfully recreated to bring back that unique lifestyle through design and character.

Of course the architect that has created this masterpiece is none other then Fasano’s favorite Mr.Isay Weinfeld, a creator of the 50’s dream, who always excites us. Placed on one of the highest spots of the property and overlooking one of the lakes and the sunset, the hotel building is defined by a large structure of pronounced horizontality, composed by two symmetric wings – they draw light curves, one slightly concave and the other slightly convex - flanking the Core body and the outcome is truly breathtaking. Looking at the Core in front of the lake at night you can almost feel the deep emotion of sweet sorrow. Focusing on the architecture itself in the wooden beams and the glazed partitions in combination with the stonework, this building is a tribute to its nostalgic style. Romance, elegance and appreciation is everywhere. The  reception lobby and veranda develop in succession, and in turn allow for wider perspectives until, ultimately, unveiling the lake and the extensive green landscape. On the underground level, the bar and restaurant extend outdoors onto a large deck projecting over that harmonically beautiful lake.

In its interior, everything is as expected. Most of the flooring is Perobinha Mica Wood and the panels and ceiling are treated with Freijo wood. Taking this detailed woodwork and merging it with the Moledo stone on the walls is our masterpiece. The furnishing is simply timeless with the icing on the cake being none other then the drop down ceiling 360° fire places. These features from Focus are the most important in recreating the essence of the old times. There is no other feeling that will ever be replaced to that of an open fireplace within a space.

In the private quarters the aesthetics remain the same whilst giving more attention to the custom visitor. To the left and right of the reception the wings await. Each of the wings is made up of a sequence of thirteen cubic modules housing all 39 guestrooms, clearly marked in the façade by the frames enclosing slabs and brickwork. The long hallways leading to the rooms are bathed in soft natural light, filtered by a sequence of pre-cast concrete slats standing all along the Northeast façade. The dynamism of this walkway is truly magnificent. Once inside the rooms you are instantly overwhelmed with the lake views leading you directly to the balcony.

There are only a certain number of words that you can say about this project, as it is all about seeing and feeling. The Fasano Boa Vista Hotel at Porto Feliz is a dream come true for all of us that crave those years that have played such an important role to everything that design stands for. It is not a building, it is a lifestyle.