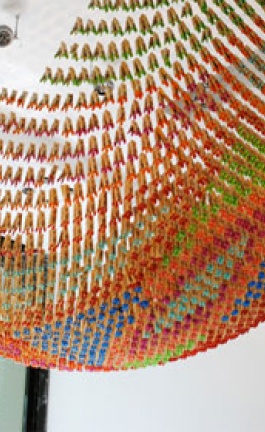 Konstantino Dregos on culture and nature

Italian designer Odoardo Fioravanti has developed a telescope for Palomar - AYL, a manufacturer of optical instruments. It marks the 400th anniversary of Galilei's first telescope, which formed a direct inspiration for the design: it has the same dimensions, the same one meter long focal length and the same wooden body.

Odoardo Fioravanti studied Industrial Design at the Design Department of the Milan Polytechnic. Since 1998 he has worked as an industrial designer, also experimenting graphic and exhibition design, with a firm will to melt different design areas into a continuous matter. βÂ¨His projects received prestigious design awards since he created Odoardo Fioravanti Design Studio in 2003. He held lectures in many design schools and academy: Milan Polytechnic, San Marino University, Domus Academy amongst others. He also works as a freelance journalist for design magazines trying to explore and to change the boundaries of design as a discipline.

Fioravanti's telescope combines past and present and has the aim to update the ancient instrument in its modern use through contemporary design and through the product’s modern optical technology. Thanks to modern optical technologies it enables the observation of the elements of the solar system, in particular the moon, but also of planets. The Telescope can be used as a powerful terrestrial telescope as well.
It is an interesting coincidence that this object was developed in Florence, where Galileo pointed for the first time his telescope towards the sky at the end of 1609. A historical home-run for Galileo!