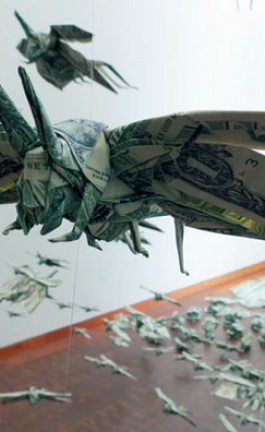 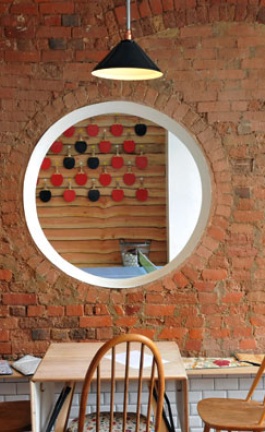 Nobody can tell you exactly what goes on inside the mind of an artist, since art always raises more questions than it actually answers. Then there’s the case that some artists are more puzzling than others. Ina Jang is one of those artists whose work unveils an endless road of possibilities. Her photos possess a dreamy abstractness, whilst being a very interesting exploration of shape and form. Although Jang comes from South Korea, it is in New York, where she currently resides, that she has found all the necessary inspiration for her photos. The pastel colors that she uses add a dramatic, almost retro touch, to her compositions, making her subjects look as if they were the inhabitants of an otherworldly land. At the same time, her heroes give the impression that they are searching for their proper identity, since they often hide their faces behind objects and shadows.

Ina Jang graduated from the School of Visual Arts in New York with a BFA in Photography in 2010. Her work has been shown through numerous galleries and festivals, including the Empty Quarter in Dubai, the New York Photo Festival 2010 and Tokyo Photo 2011, and has been featured in The New York Times Magazine, The British Journal of Photography and Foam International Photography Magazine. Yatzer, as curious as ever, found Ina Jang and tried to get inside her creative mind. It has been an intensive journey and we are more than glad to share it with you!

Tell us something about your background and the very first time you realized that photography was your thing.
I started taking pictures when I moved to Tokyo years ago. Since I was new to the city, I spent a lot of time with my sister and my camera; soon enough photographing my sister became my obsession. Then I started coming up with new ideas for each shoot. When I realized how much of my life revolved around photography - just a pure act of creating images everyday - I decided to move to New York to study photography.

There is a certain ambiguity in your photos; the spectator can never be too sure about their exact meaning. You have mentioned, in one of your interviews, that you portray the world as a giant white canvas. I perceive it as a challenge where people can project whatever they want, having the freedom to decide where they stand exactly. Is this level of mystery and abstractness, most present in your recent works, reminiscent of the way you perceive life and art?
I only began to imagine the world as a giant white canvas since it was such a stress to find the right location in the city to make my point across. I liked the idea of not belonging anywhere and not being identifiable. I just wanted to drop off these figures, colors, spaces, and cut-outs on a canvas which is actually completely opposed to my initial approach to photography. Then image making just became a practice to figure out my own language.  So I am not quite sure if I am trying to make a bigger than life statement through my images. They are just whimsical and playful ideas that float around in my head, and I try to pin them down and visually express them.  I am sure that my work is open to interpretation as there aren’t any identifiable details in the image, but the same can be said for the opposite. I think that it really depends on whatever a viewer is willing to see from the work. The viewer’s conception is therefore completely open as there really isn’t enough information but also very much limited for the same reason.

We can never see the real faces of the people that are featured in your photos. They are left blank or they are hidden behind a jacket/any kind of an object. Sometimes I have the impression that they are trying really hard to find their place in the room and, in a way, in the world that surrounds them. Would you say that your heroes are searching for an identity?
That is a very interesting question even though I honestly didn't think that far when I made the images. I simply prefer not to have any information about a certain individual because I cannot stop thinking of how the picture was made when I see a photograph with a person in it. I just wanted my ideas to be pure ideas instead of them becoming portraits of someone.

There is an element of fashion that influences or pervades your photos, especially in the way that your heroes perceive their bodies and their clothes or in the way a pattern (like dots) can appear on an unexpected surface or object (a rose). Is fashion a point of reference in your work?My general interest is in style and design, not so much 'fashion' per se; as fashion can be quite broadly defined.
I've heard from many photographers (at least people I know of) that began taking pictures because they couldn't draw very well, this includes myself. A camera is such a convenient tool to create a certain outcome when compared to a brush, a chisel, a hammer or a sewing machine. I usually think of what I would have made if I were a painter, a sculptor or a clothing designer.... So I began thinking as if I were designing a clothing collection when I started my recent body of work. I was very aware of the colors, spaces, human figures, and patterns which play major roles in tying the whole thing together. And I wanted them to flow organically.
Tell us something about the intentional two dimensional quality in your photos. In my opinion, in combination with the pastel colors you often use, it’s like opening a path to a “faint dimension”, elusive but at the same time so real, which is very inspiring.I really like your interpretation of this new dimension - a faint dimension!  I think that people somewhat unconsciously react to photography as if we see a mirror of the reality - what I find interesting in photography is that it is so flat. I'd like to think of my work as a humble mixture of graphic design, sculpture, drawing, performance art and even clothing design. I like photography since I get to can try out all the different acts of making an image and flatten it out as a piece of paper.

Ina, you have lived in Seoul, Tokyo and New York. Where do you seek inspiration in your everyday life? And where would you like your next adventure to take place?
Solitude brings such a wild imagination - I am most inspired when I am alone to think about what I am going to do next. I love traveling and being in a strange place, however the most adventurous moments only occur when I am in the shower or in bed to think about the ideas that have not materialized yet.

What are your feature plans? What is left for you to explore?
I just want to make more images. It is somewhat unsettling and also very exciting not knowing what to explore next.