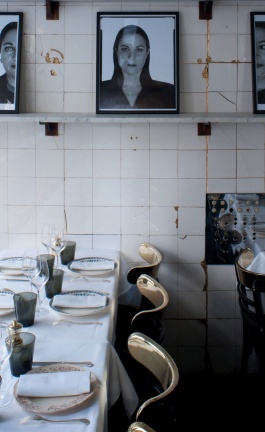 How Making Breakfast Is Like Rolling a Boulder up a Hill for Artist Lee Mater...

Battling with everyday life is an eternal beginning for artist Lee Materazzi, a routine of mundane tasks which for her are a bit like pushing a boulder up a hill – again and again … and again. Thankfully she also finds it funny, something which certainly takes the edge off things.

Whilst making breakfast or having a shower have never looked so difficult, Materazzi’s compositions express how the humdrum of life can be a mind numbing affair that borders on depression but humour too. For instance in one of her installations, the artist is seen with her whole head jammed into a container of Cheerios expressing the utter frustration of repetition in pouring cereal day in day out – and yet the extreme movement is also amusing. In another piece, a figure is seen lying underneath the breakfast table with only their feet visible, as if they’ve been sucked in by the banality of daily routine; again here their frustration is funny, although their utter desperation is evident and it’s this intense show of emotion that brings a darker reality to Materazzi’s work. It’s like the subjects have carried out the same task so many times that their entire being starts to fuse with the object of banality.

Materazzi puts together compositions of people in unexpected places with unexpected objects and photographes the surreal seemingly mundane scenes. The people who pose in her compositions – her friends, family and herself– are often arranged in such a way that they are not recognisable and not seeing the subject’s eyes. The fact that their whole being is absorbed in the movement of the composition not only means the viewer’s attention spreads to the rest of the bizarre composition, but also gives each work an eerie dimension.

The artist’s latest show entitled ‘DIY’ at Quint Gallery in California, USA, was a series, that for Materazzi, illustrated Sisyphus’ task of rolling a boulder up a hill in Homer’s Odyssey.

And then, in his painful torment, I saw Sisyphus striving with both hands to raise a massive rock. He’d brace his arms and feet, then strain to push it uphill to the top. But just as he was going to get that stone across the crest, its overpowering weight would make it change direction. The cruel rock would roll back down again onto the plain. Then he’d strain once more to push it up the slope. His limbs dripped sweat, and dust rose from his head.

While the Sisyphean task of rolling the boulder up a hill only for it to tumble back down the hill is humorous, it is also deeply unnerving. Materazzi’s work always contains this dichotomy. Despite the dark edge there is plenty of humour in the exaggerated poses and predicaments the characters find themselves in.

In her ‘DIY’ series, all of the compositions were realised in her garage, which she dresses with antiques, bouncy balls, drawings, odd furniture… The artist manipulates reality with her own hands; none of the illusions in her work have been created with Photoshop. One of the photographs is in fact of her toddler being lifted by a bunch of colourful helium filled balloons and flying off into a far corner of the garage in comical cartoon-like fashion. While it’s certainly practical to have tied the young child to the balloons because it gets her off the floor and out of the way of her mother’s DIY projects, on the other hand, it would be devastatingly sad for the little girl to fly away whilst being slightly mean of her mother to have pinned her so close to the ceiling that she can’t move. This combination of DIY and interaction with her daughter also draws parallels to being a new mother.

Materazzi’s decisively dark compositions perfectly illustrate the frustrations of repetition in carrying out mundane tasks everyday while the cartoon-like exaggerated disclosure of the characters’ reaction to this banality bring a lighter, humorous quality to her installations.