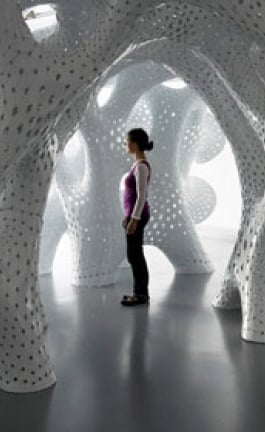 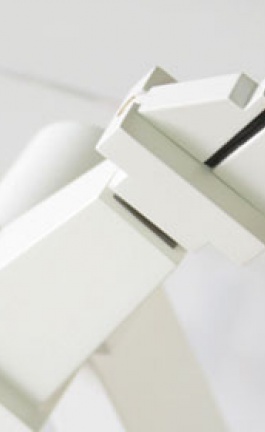 Maxence Parache is a young French designer based in London, specialized in digital media currently working on a variety of projects including interactive, graphic and motion design. A recent graduate of the MA Communication Design course at Central Saint Martins, London, his Master’s final project, called Hyper(reality), caught our attention.  Mixing digital media and product design, Maxence created an augmented reality helmet working with Microsoft's Kinect which allows the user to change his point of view of space, e.g. in a videogame or 3D software. In embodying Maxence’s concept , based on hyperrealism theories, Hyper(reality) provides a new digital experience, immersing the user in an alternative version of reality seen through a helmet. As Maxence explains, instead of having a static point of view, the user is able to navigate through the 3D environment. Hyper(reality) facilitates new behaviors specific to the virtual world while the user still has to physically interact with the real environment.  Furthermore, it creates a surprisingly odd interface between these two states, giving the impression of actually floating into a dream space where everything seems otherworldly and at the same time extremely real.

The Hyper(reality) suit is composed of a helmet with high definition video glasses, an Arduino glove with force sensors controlling the 3D view and a harness for the Kinect sensor. The code and electronics are open and can be easily modified and upgraded so that the experience can be adapted to multiple places and scenarios. By creating new virtual spaces based on the scanned real environment, the user is able to change his point of view and immerse himself/herself into places where access or movement is restricted, such as a museum collection. Maxence explains how:  “I was interested in how people act when they are constrained by technology, how their behavior changes once I modified one of their senses and how technology influences our life and social interaction. Designers such as Kenichi Okada, James Auger or Jimmy Loizeau were, and still are, great influences with their works and publications.”

Gradually, Parache started to orient his work towards interaction design based on  research from the likes of Etienne Mineur and Aram Bartholl regarding technology and the way it affects our behaviors. Since the very beginning of this project, Maxence engaged in a wide range of experimentation with a multidisciplinary approach. He states: “I did a series of videos experiments, recording my habits with a head mounted camera and started experimenting with creative coding and visual effects trying to distort space and time in digital space. Gradually, the research organized itself and the project became clearer. I attempted to emphasize the human capacity for adaptation by creating technological implants and enabling an odd and dependant relationship between humans and technology, immersing the user into an alternative version of reality, with new ways of interaction.” The final result, as seen on Maxence’s videos, summarizes all of his principles in a perfect way. Maxence has definitely managed to write a new page concerning this strange symbiosis between humans and machines, offering us the possibility of an intense journey into an altered space. In the hope that we will be able to try it ourselves some tie in the future, we at yatzer promise to keep you updated about Maxence’s projects. Who doesn’t want to escape from his proper reality, even for a while, after all?

1 // Design of the helmet (prototyping the mold, vacuum forming, sanding, filling and painting)

2 // Geffrye Museum - London :  The Geffrye Museum collection consists of furniture, textiles, paintings and objects displayed in a series of rooms according to period, from 1600 to the present day. Experiencing the device in a museum allows the user to immerse himself/herself into the collection, thereby gaining a totally different view of it. The essence of the Geffrye museum is therefore experienced as a whole, as the user is navigated from the large-scaled architecture of the rooms to the smallest pieces of art thanks to this virtual vision.

3 // The Last Tuesday Society – London: Immersed into this dream-like virtual space, the user gradually discovers the shop’s collection of curiosities. Behaviors are soon modified as the notion of scale is distorted, all this pushing the boundaries of the physical space. Venetian masks, stuffed animals and old sculptures start floating in the air around the user creating a new sensorial experience.