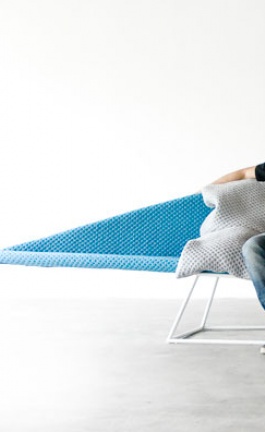 When architects and designers are called in to redesign a space that already exists for a specific reason and their goal is to reinvent that space for an entirely different use, professionals are faced with a duality of responsibility and potential.  In order to respect what once was and bring truth and beauty to the space that is without time or purpose, the task at hand becomes visceral. Questions arise as to how we want people to feel in this space. How can this space envelop the senses and become functional in its new incarnation while retaining its inherent beauty?

These questions emerged when churtichaga+quadra salcedo (ch+qs) architects commenced on their project to turn an old slaughterhouse in Legazpi, Madrid into a public cinema center. Their imagination would become their guide to tie in the past with the present and the raw emotion with the practical. The public cinema center is a huge complex made up of several connecting buildings, housing a film archive, a film and television studio, offices, two cinemas, a canteen and a summer film patio.

The designer had the following three inspirations to draw from when creating the design:  The magical backlight and contrast of the films, a childhood fascination with basketry and weaving, and technical human infinite geometries. And as one looks at the finished project, it is easy to spot these three dynamics at work. Dark gray slats of pine wood that shape the walls, ceilings and floors create a clear distinction of the new space from the jagged exposed bricks of the old slaughterhouse. This clever use of materials provides room for both, the history of the old slaughterhouse to coexist with the sleek new design and the new beginnings of a modern cinema center. The marvel is how these potentially harsh and intense materials manage to never overwhelm but look rather Zen and clean.

The dark gray pine wood acts as a backdrop where the designer let his memory and imagination come to life. His childhood fascination with basketry comes alive and influences the lighting as “floating figures” and “huge vibrant baskets” that occupy the open main spaces. The Archive Area is covered by a “permeable basket” that works as a gigantic lamp that one can walk through and on top of. It filters light and is constructed of what seems to be an infinite number of woven orange hoses (actual conventional industrial irrigation hoses). The main room is illuminated in orange by another floating basket that fades into the darkness, with only the black surface remaining when a movie begins playing. In the small projection room, the basket weaves once again through a black space and only when a window opens to let in natural light, can one see the intricate work and brilliant concept at play.

The Matadero promises to be a great attraction and public gathering space, a centerpiece project of an urban renewal effort to bring cultural and art programs to southern urban Madrid.

>> The tectonic history of brick and the powerful rhetoric of the old slaughterhouse are the background, and also figure in the scenes of the story, a story in which a continuous low background, a wooden mono material painted in dark gray defines the new program deployed on the walls, floors and ceilings, allowing a clear separation between story and History itself. Against this dark background, my own memory outputs floating figures; huge vibrant baskets that define the main spaces. <<
churtichaga+quadra salcedo architects