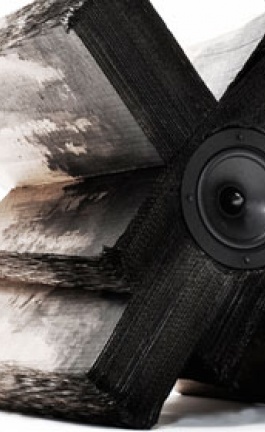 This idiom was the inspiration for Laikingland’s latest kinetic object, which describes the situation in a very chic hand painted ceramic cup and saucer.  The design object is a beautiful kinetic hand-crafted object which suggests a sense of play and nostalgia.   Storm in a Royal Delft Tea Cup will be launched this July in a limited edition of 12 pieces.  The object resulted as a “collaborative project between the designer John Lumbus, Laikingland and the ceramic specialists Royal Delft and The New English.”

Yatzer had a sneak preview of Storm in a Tea Cup and even had the opportunity to play with the kinetic object as it was displayed at Ventura Lambrate in Milan, during Milan Design Week 2010.  As you turn the golden handle which is attached to the tea cup, “the golden boat rides upon the mechanical waves, above the stormy clouds periodically revealing a shining bolt of lightning.”

Although the idiom refers to an event which has been exaggerated out of proportion all in this design seems to be in proportion!  What we really enjoy about Laikingland objects is the fact that apart from design objects they engage the viewer into using them and playing with them.  You’ve definitely seen their work showcased before on Yatzer as we were very delighted to present their kinetic art.

Laikingland is a company which has been built by two life long friends’ artist, Martin Smith and engineer, Nick Regan.  Together they have put their knowledge from their disciplines to create the art objects which have drawn our attention.  However, Laikingland’s “intention is to design and manufacture beautifully crafted kinetic objects that engage, and evoke a sense of play and nostalgia.”  Storm in a Tea Cup as well as other Laikingland objects are manufactured by Laikingland in the UK and the Netherlands. Laikingland's kinetic objects are available from Moss New York, Colette Paris, Frozen Fountain Amsterdam, Domus Plus Belgium, Mint London and directly from their website.