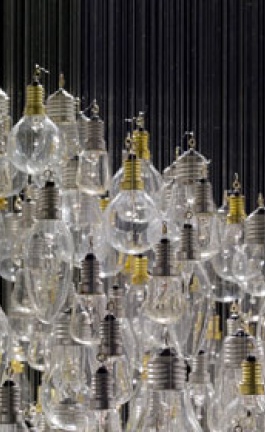 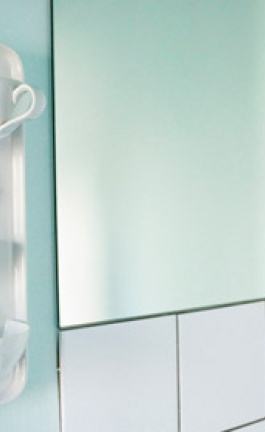 The porcelain world of Laura Pregger

(Marc Jacobs // Mens Store, 2000 403 Bleecker Street) © Don Freeman
Exterior corner. The interior symmetry centered on the walnut wall is subverted by a strong oblique axis
from the corner entry to the rear of the store, accentuating the relationship to the corner intersection.

When I pick up a design related book most of the times I skim through and before I realize it I am on the last page as I’ve seen most of the projects listed within the book and have mainly understood the idea of the projects from the images provided.  Isn’t it great though when the images are accompanied by plans, models and sketches of even the slightest detail?  That was when I realized that I didn’t make it to the last page as fast as I usually do, instead it took me about an hour for just a first quick glance into this book.  Going back and reading it slowly I realized that this book is a must read for any architect, designer, or student who wishes to re-evaluate design through the eyes of Stephan Jaklitsch Architects.

Jaklitsch claims that design is no science and I couldn’t agree with him more!  Design is the planning that lays the basis for the making of every object or system.  As a process, it can take many forms depending on the object being designed and the individuals who are going to be the end-users.  Through the designing process the designer considers, perceives and evaluates the elements.  Inspiration for the design solution may come out of nowhere, and not when you are struggling to give a design solution.  Most of the times your inspiration and idea is right before your eyes and you just can’t see it.  That is the nature of design and what makes it so magical and unexpected!

(Marc Jacobs // Los Angeles, California 2003-2005) © Paul Warchol
The two primary stores sit across Melrose Avenue from each
other. Their juxtaposition highlights a difference in the brands as
well as a shift in the evolving urban context of Los Angeles: one
in the excessive tradition of Beverly Hills and the other with a
contemporary, sparse gesture of the strip mall along the avenue.

(Marc by Marc Jacobs // Los Angles, California 2003-2005) © Paul Warchol
Main sales area. The interior adopts an axial layout in line with the newly constructed addition. In contrast to the inward-facing
collection store across Melrose Avenue, the design strategy for this project directly addresses the speed and activity of the avenue
it faces by opening its front façade to create a dialogue. The store’s rational order, simple finishes, and fixtures act as clean backdrops,
easily interpreted at 55 mph. The diffuse interior circulation, high level of craft, and richly detailed interior lead to a more nuanced
understanding of the space when viewed close up.

(Marc Jacobs // Paris, France 2004-2006) [left] © Paul Warchol
(Marc Jacobs // Paris, France 2004-2006) [right] © Jean-Philippe Caulliez
The storefront at the Gallerie de Montpensier. The updated façade takes advantage of the views
out to the garden beyond and signals a modern presence, while
maintaining a clear relationship to its centuries-old surroundings.

Habits, Patterns, Algorithms, presents a diverse selection of projects by Stephan Jaklitsch, the New York-based architect behind all Marc Jacobs retail locations worldwide.  Apart from all the Marc Jacobs retail projects the book includes other realized commissions as well as proposals.  This volume presents a range of projects, from small-scale retail constructions to freestanding residential works that engage the surrounding landscape.  It provides a glimpse into the rarely discussed details of the design process, from land site and building code limitations to client-imposed conditions.  The book includes a chronological sequence of projects at every stage; sketches from the conception of the idea, to models and stunning photography of the finalized project accompanied by text.  Each of the projects has its own logic behind the concept and the program of the end result; the book is approached in a study-case manner.

Shelly Steffee Store // New York, New York 2001) © Paul Warchol
View of storefront. The pivoting glass doors were intended
as a visual contrast to the solidity of the existing cast-iron and
masonry building.

About the authors//
Stephan Jaklitsch, AIA received his BS in Architecture from the Georgia Institute of Technology and M-Arch from Princeton University. As Principal of Stephan Jaklitsch Architects since 1998, he has taken the firm from a small design studio focused on residential and commercial projects in New York City to an award-winning,15-member architectural firm with a diverse, international portfolio of work. Today, with several hundred completed projects around the world, Jaklitsch has seen his work exhibited in New York, Chicago, and London, and featured in prominent international publications. Through his work, Jaklitsch seeks to explore the poetry of architecture – using the manipulation of space and light to create rigorously detailed spaces that convey a sense of meaning and purpose to their respective contexts.

(Marc Jacobs // Women’s Store, 2001 406 Bleecker Street) © Paul Warchol
The treatment of the walnut wall, the ceiling, and the positioning of the mirror are all intended to imply the connection to the men’s
store from the women’s entry and draw the customer deeper into the space. The wider area at the rear affords a more private zone at
the fitting rooms that is partially screened from the street.

Mark Gardner was named Jaklitsch’s Senior Associate in 2005. He received his training at the Georgia Institute of Technology and at the University of Pennsylvania, where he now also teaches. Gardner takes a serious interest in the nexus of architecture and art, a nexus of longstanding importance both to his professional practice and to his writings. A contributor to Johanna S. Dickson’s Pamphlet Architecture 23 MOVE/Sites of Trauma (Princeton Architectural Press, 2002), he is committed to practicing architecture as socially beneficial art form.

(Marc Jacobs // San Francisco, California 1999-2000) © Paul Warchol
The book-matched walnut backwall and canted steel and glass clerestory are a visual draw into the store and the counterpoint
to the frame of the storefront.