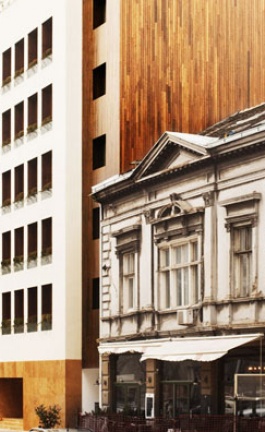 The Square Nine Hotel by Isay Weinfeld in Belgrade, Serbia 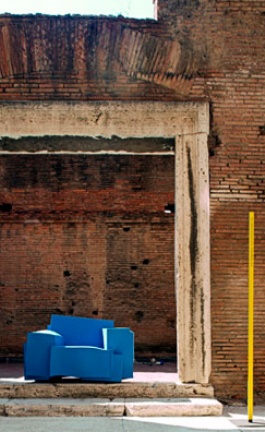 Taking The Chair, a show presented at the Marsden Woo gallery by Caroline and Maisie Broadhead is a highly sophisticated exhibition with a strong narration element which engages the viewer intellectually with a powerful concept while telling different stories in a comprehensive way.  The artists drew inspiration from seven selected paintings by masters such as Hogarth, Magritte, Velasquez and Vermeer and working together along the lines set by the masters, they created a body of work whose meeting point becomes the chair. Maisie created digital photographic prints for the exhibition, re-staging the original paintings. Meanwhile, Caroline chose second hand chairs which she reworked using different materials.

Caroline's chairs appear in Maisie's photographic prints, which retain a painting style –thereby enhancing the artistic concept- remaining in a dialogue with the theatrical setting, the models and the viewer. Themes relevant to the artists revive and narrate the story of the models, the story of the chairs and that of the artists. The people presented in the photographs are family members or the artists themselves stressing the artists' deep personal engagement with the project. Objects such as Caroline's mother's weeding dress are worn by Maisie's son depicting once again their concept and the themes they explore.

Themes such as human absence, traces of memory, domestic scenes of everyday life, family members who become models, familiar and unfamiliar objects revive in front of our eyes and engage us in a dialogue both with the artists, the models and ourselves. The viewer when visiting the exhibition confronts the ever-present chairs and the allure they convey.

All the chairs used in the photographs are deliberately scattered throughout the gallery space. Some empty, some upturned and some beautifully dressed with garments. They give the impression that someone was sitting on them and that their traces can still be found on the actual objects. This exhibition uses themes and notions that we all encounter in our lives in an encompassing manner overwhelming the viewer who in turn raises his/her own existential questions.

Yatzer caught up with the artists to learn more about their first collaboration and the show.

What motivated you to draw inspiration from paintings by masters such as Vermeer, Velasquez and Magritte?
MB: We wanted to find a point at which our work could meet, in researching paintings that had an empty chair that we still enjoy the composition of, was what determined the chosen referenced images.
CB: The way in which we worked followed on from previous work completed by Maisie, where she had taken paintings that had jewellery as a strong narrative restaging and photographing them. I had worked on several chairs and wanted to explore this subject more after much discussion where these two ideas came together.

Which were the common and contradicting elements in your collaboration?
MB: This was the first collaboration it felt very natural, and worked well.
CB: I have worked collaboratively on a number of occasions. One element in this was where we were both keen on getting a balance of producing work that was both collaborative and individual works that retained the identity of each of us. We worked very well together, we talked a lot, and we questioned each other, negotiated and edited ideas that didn’t fit in with the common ground.

Merging the past and the present is a constant theme in the show. What is it that makes the show unique?
MB: The past as the present theme is something that came about as a reflection of our previous thoughts and concerns, my reworking the old masters and the old chairs.
CB: The past as a constant presence is nothing entirely new. It is a mix of something familiar and a difference from the familiarity that causes tension. It was useful for us to discuss how the situations in the paintings were relevant to our own lives and to the present day.

Is nostalgia one of the themes that inspired you for this show?
CB: I don’t think the show is a nostalgic one. I think it picks up on threads of experience from a previous age, and re-interprets them into a contemporary time. I don’t think that any of the pieces imply that the past is better than the present.

Using familiar and personal things like the wedding dress creates an intimate relationship with the viewer who witnesses the show. Was that something you had in mind?
CB: We were using personal icons, objects that are in our living spaces that mean something to us. They also act as substitutes and impersonations of the objects in the paintings. There was a certain flexibility in the way these objects related to the original painting and to the re-staging. Maisie was looking for ways of fulfilling a proximity to the original but also appropriating familiar things to make connections between periods of time / situations.

Why does the chair become the meeting point where your works confront one another?
CB: The chairs I chose to work with are all upright, wooden chairs that have been bought second hand, they are modest in their design and material.  They are domestic items which wouldn’t be out of place in a modern home as such they are so ordinary. A chair denotes a person. The designs are controlled by the scale and proportion of a body, and most had evidence of use and contact with bodies. All this is interesting to me. In the paintings, all except for one was an empty chair. This gave a sense of expectancy of who might be approaching or who may have just left. I liked the idea of the invisible presence that the chair gave. The chairs had to work in the photographs, and in three dimensions.