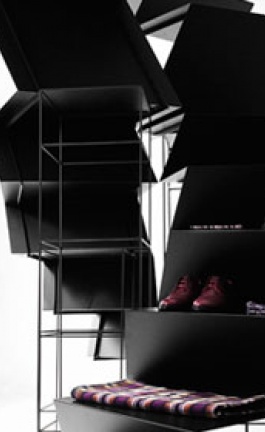 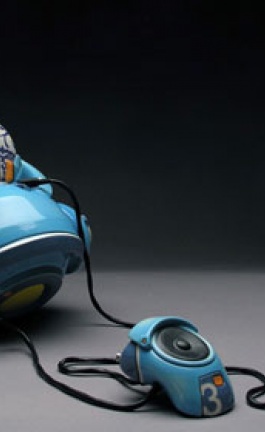 To footwear designer Andreia Chaves, each shoe is an individual work of art.  Raised in the busy metropolis of Sao Paulo, Brazil – Chaves understands that beauty can be found in chaos, a concept that reveals itself in her footwear designs.  She explains this in her own words, "The fact that I grew up in a chaotic city like Sao Paulo, full of contrasts, being in contact with such diversity and constant exposure to different visual inputs, has inspired me in how I think and conceptualize my shoes. Looking at my work, I can clearly see influence coming from my South American sense of versatility.  Also in the mix - what I have been experiencing in Europe."
During her time in Florence she’s been intensely studying form, texture & visual effect, and experimenting with different materials on footwear design.

These concepts come to life in each shoe created.  For example, “The Invisible Shoe” has a mirrored surface, creating a deceptively obscured optical effect with every step taken.  The chameleon-like façade blends in perfectly with any environment.

“The Prism Shoe” is a fascinating structural design that by itself looks like an intricate work of origami – casting beautiful kaleidoscopic shadows against the ground.  Here we can clearly see Chaves’ chaotic - yet orderly - paradox coming to life through her shoe designs, resulting in dramatic silhouette.

The “Form & Texture Shoe” exhibits a disciplined study of form and material while keeping just enough chaos to stay interesting.  The contradiction here is the seemingly indestructible framework fused with the disorderly arranged leather and sycamore wood cubes.  The contours create a theatrical statement nothing short of impressive.

Chaves finds it thrilling how each particular material has the power to completely change someone’s vision about a design.  An example for this, she sites, is the idea of a sandal made with simple Velcro strips (see “THE VELCRO SHOE” below) holding the foot, where you can easily change its shape, redesigning it and creating sculptures in air.

With influences such as Maison Martin Margiela, Rei Kawakubo, Yohji Yamamoto and Issey Miyake., it’s clear that Chaves appreciates designers who provoke – and shatter - common perceptions that people hold.  Chaves is currently focusing on her final collection – an exploration about the moving body - which is to be presented in February 2010.