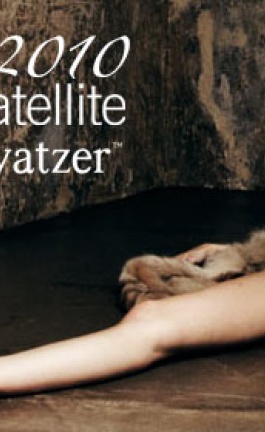 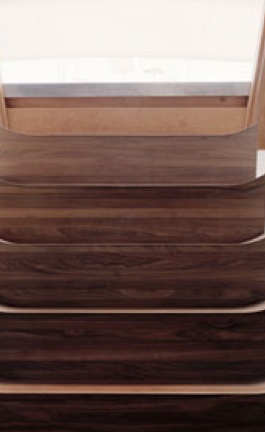 “The Power of Love” was exhibited during Salone del Mobile 2010 Milan at STRAF Hotel.
STRAF Hotel acted as the ideal setting for Mathieu Lehanneur’s installation in collaboration with François Brument, flux designer.  The unconventional building with the intellectual design in the heart of Milan presented Lehanneur’s works in an ideal way.  The concrete and the quarry rough slate prepared the setting; as we entered room 107 we came across a sculptural fire and two head phones.  The three elements symbolized two lovers who are joined by their love.

The installation consists of two separate sets of headphones, one for each lover and the fire which connects them is The Power of Love; the entire installation acts as a type of lovemaking accessory, a foreplay toy.  Despite the fact that the object in itself is an object through the concept imposed, the object is transformed into a sculptural installation.   How this installation works? Each lover puts on a set of headphones and through the tracks recorded they convey their own personal message from their intimate universe.  Inspired from the cult scene of the French film La Boum and by the abundant flirt and eroticism in Lehanneur’s generation the artist uses the object as a symbol of erotic foreplay.  In the film La Boum, a young man seduces Sophie Marceau by having her listen to a sentimental ballad on his walkman while everyone is dancing to the rhythm of an up-tempo rock song.  Thirty years later through the parallelism of the 1980 La Boum film Lehanneur reintroduces the lost romanticism and the foreplay in love to our fast tracking world.

As each lover listens to their track, they experience unique sounds and feelings, the lovers are now not synchronized.  A corresponding difference creates an unknown desire; the desire created is the shimmering fire, which under real life circumstances the fire would create heat, unity, and an overexerting passion for love.  “The lovers see in it the perfection of their original love that they seek to rediscover and stoke.”

Through this interactive installation Lehanneur represents the flaming fire as the meeting point where the two sound tracks “play” yet, they exist separately.  Such is the case when two individuals fall in love, they create their own universe (the fire), yet each individual retains their own identity. When we fall in love we are all awestruck by the very moment.  The factor of love generates different feelings every time we fall in love; the feelings compile moment by moment, day by day and an extreme power which is ready to explode is formed!

As a result, the challenge faced by the artist was to define what this element of explosion would be.  The explosion is therefore represented by an element as unstable as fire which would allow this elusive power to be defined through an object.  According to Lehanneur studio, from an aesthetic viewpoint, this piece does not bear the mark of the designer.  He designed neither the headphones nor the flame; in fact, he merely chose them. The flame is generated by a computer using an algorithm creating special effects, then laser finished by a robotic machine. As for the headphones, they are the standard type available in stores. The importance of choice in the creative process – more precisely, the aptitude for eliminating the unnecessary – is certainly appreciated, but choosing among the products of our mind is not the same thing as selecting elements of reality.”

Through this sculptural interactive installation Lehanneur aimed at giving a design object the possibility for self-expression.  What he definitely has achieved is to create an interactive moment which may create intimate and profound moments.  However, many might debate as critics have done in the past whether a design object may be considered a work of art; the decision is up to you!  The Power of Love installation is part of the exhibition Preliminaries // design at the threshold of love by SLOTT Gallery and Exquise Design.  Works of other artists who presented their art in the same exhibition will follow shortly in our Milan 2010 Yatzer Report.