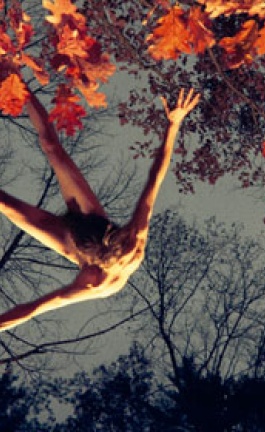 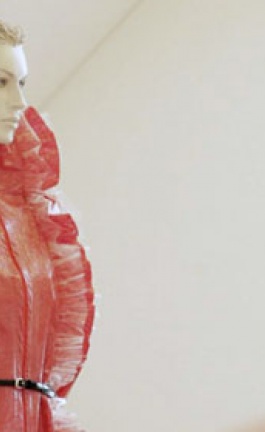 Feathers stand for protection and shelter and bring to our minds our need to fly above the everyday routine and reach for the unknown. They are also connected to mythical fairy tale creatures, symbolizing power and the art of enchantment. With their colors and their complex structure they magnetize and impose. British artist Kate MccGwire shares a fascination for feathers that begun like an accident and finally became a long term love affair. Her latest works are made entirely by feathers and, far from mere ornamentation, Kate uses them to create some really haunting pieces. Her feathers form strange shapes that appear to be alive, they come out of unexpected surfaces, they even invade space with some very surrealistic effects. We don’t know at which extend the artistic means condition the final result, but Kate’s work manages to transmit a certain kind of out of this world beauty, both imposing and fascinating.

Kate MccGwire’s latest work is called Corvid (2011) and forms part of the Bound exhibition (1 - 30 April 2011) in which she participates with fellow artist Alice Anderson. Together they inaugurate All Visual Arts’ (AVA) new space at Kings Cross, London, in the best possible way. Corvid, according to Kate, is a serpentine formation made of crows’ feathers, a bird associated in folklore with thieving and deviant behaviour. The crows' feathers used in Corvid were sent to her by gamekeepers and farmers who shoot the birds to stop them damaging crops and fledgling birds. A part of this story is reflected in Corvid that with its repeating pattern transmits a wicked kind of beauty.

One of Kate’s more celebrated works is called Slick (2010), an in situ installation in a fireplace. The gloriously coloured feathers used in Slick come from the wings of magpies - just six on each magpie wing, their blue/green colour only apparent when the birds take flight. The final result is more than intriguing: in one hand one is magnetized by the beautiful colours of the feathers and the three dimensional effect of Slick and on the other hand one feels invaded, even slightly frightened by this mesmerizing mass that comes out of the fireplace instead of fire. Certainly intriguing, Kate’s work hides a lot of surprises for the stranger. This is apparent even in even older works, like Fume (2007), where she literally and metaphorically plays with fire: a hole burnt into the pages of a hand-made book resembles an inverted flower!

We invite you to get deep into Kate MccGwire’s universe, letting your imagination fly high!