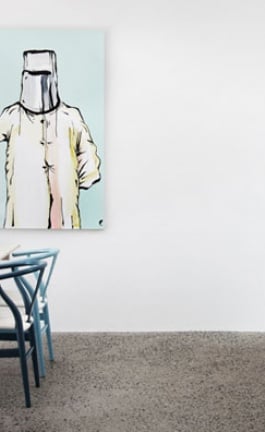 Have you ever bought a multi-pack of dish sponges, plastic cups or paper clips only to use just one and throw the rest of them to a life doomed at the back of a cupboard? This was the inspiration behind WE MAKE CARPETS, the brainchild of Dutch art collective Marcia Nolte, Stijn van der Vleuten and Bob Waardenburg, the Dutch trio who assembles everyday household items into art installations that resemble carpets. So products that normally have no value once they have been used, such as plastic forks, cups, bottles, plasters, pasta, cotton balls and pegs are creatively arranged in a rigorous style to form ornamental graphic patterns.

Since we last featured them back in 2010, they have certainly grown stronger; continuing to redefine what actually constitutes a carpet by pushing the limits of what is possible. New carpets now include the impressive ‘Bottle Carpet’ set against the dramatic backdrop of the Moroccan Sahara desert, the vibrant ‘Sponge Carpet’ presented during the Dutch Design Week 2012, the elaborate ‘Disposable Carpet’ created for the Temporary Museum in Amsterdam, the oh-so-luscious ‘Candybar Carpet’ for the Slokdarm Festival in Veghel, in The Netherlands and the vertical ‘Cocktail Carpet’ that was commissioned by stichting NDSM-werf, Amsterdam.

WE MAKE CARPETS are inspired by the colour, shape and possibilities of the material that has been chosen, rendering the creation process of each piece as unique as the material itself. The outcome is a whimsical crossover between embroidery and sculpture, which emerges as a celebration of domesticity and the worthless object. Formerly mundane items are now assembled in meticulously controlled constellations creating an ornamental object of wonder, as if the lovechild version of a Duchamp and Missoni readymade.

Bold and experimental, beautiful and elegant, the carpets blend together each individual object’s form, shape, texture and colour into one unified piece, rendering the original objects seemingly unrecognizable.The immediate identification of the objects is hindered from afar and it is only upon closer inspection, that one is able to tell the medium that has been used for their creation. Although the products that are used still carry their inherent domestic attributes, their role however, now shifts from functional to purely ornamental. And what remains is a spectacular pattern extravaganza made of everyday objects. Momentarily, they may feel out of place within an exhibition space. The fact however, that they are efficiently arranged in a shape so predominantly domestic brings to mind the place where they originally come from; the home.

Ranging in size from small to bespoke large-scale installations for festivals and exhibitions, these delicate yet intricately dense compositions play with the notion of the decorative carpet while flirting with a role that transcends the ornamental. Throughout the centuries decorative carpets have been labour-intensive creations, traditionally associated with wealth, prestige and power. Now a carpet made of discarded consumerist products, conveys, as the embodiment of modern-day domestic life, a clear message about a society so wealthy that even its leftovers can be turned into something truly beautiful.

The carpets that WE MAKE CARPETS create are temporary pieces that are not meant to last forever. Maybe it is this facet of their ephemeral nature that makes them so appealing. In gazing at them, while we still can, our eyes almost become lost in a symmetrical maze of kaleidoscopic patterns, where, upon close inspection, an array of narrative trajectories seem to emerge, inviting us to mentally follow them. Just remember not to step on them!