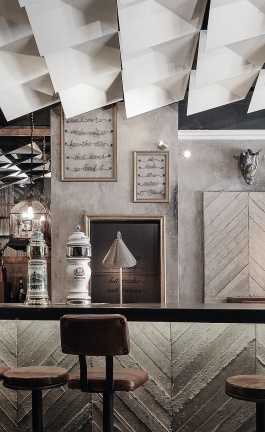 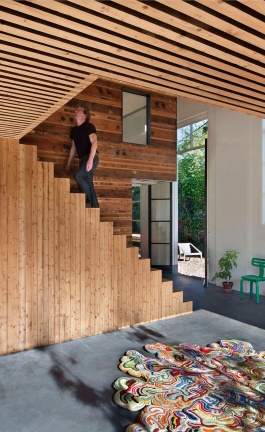 Upcycling to Call Home: "The House of Rolf" in Utrecht

BIENNALE INTERIEUR 2016 was a festive occasion for the thousands of international visitors who gathered in Kortrijk, Belgium between 14-23 October 2016, to celebrate its 25th edition! Established in 1968 by Voka - Chamber of Commerce West-Vlaanderen, the event has gone on to attract the very best from the international interior design scene.

"Silver Lining - Interiors", was the theme for this year’s event which was curated by OFFICE Kersten Geers David Van Severen in partnership with artist, Richard Venlet, and graphic designer, Joris Kritis, and was perfectly represented in the Silver Lining structure which hung along the corridors between the main exhibition halls of Kortrijk Xpo, not to mention the staff's silver outfits designed by acclaimed Belgian fashion designer, Ann Demeulemeester. Meanwhile, 400 meters away in Voka's new headquarters - designed by  OFFICE Kersten Geers David Van Severen and Godderis in 2010 - a retrospective exhibition curated by Katarina Serulus – a recent PhD graduate in Interior Architecture at the Henry van de Velde Research Group (University of Antwerp) and scenographer Ward Heirwegh on the past twenty five editions in honour of its 25th anniversary, guided visitors through INTERIEUR's roots, featuring catalogues and reference works on the participants, projects and honoured guests over the years, as well as all the INTERIEUR posters from 1968 till the present day.

Other than the Kortrijk Xpo, additional exhibitions - such as WILD THINGS by trend forecaster Li Edelkoort and Philip Fimmano, and Dries Otten's W/O WE ARE THE NEXT GENERATION featuring Flemish design school talents - were curated in the newly redesigned Texture Museum (by Brussels-based noAarchitecten) as well as at its city centre, Vlaskaai building - were we must mention the refreshing JUICE BAR which was designed by Yesmine Sliman Lawton and Perrine Poncelet from Mons. A walk around the city revealed some other not-to-be-missed exhibitions, such as Danish label, Ferm LIVING's pop-up, in collaboration with de Beste Kamer, wherein Ferm's new collection mingled with an URBAN JUNGLE in a historic coach house.

When the coveted Interieur Awards were handed out, Yatzer's founder, Costas Voyatzis, was honoured to be a member of the SPACES Category jury that awarded Le Banquet Gaulois, We Are Family, Terra, NOSE, and Made/Found, the five bar/restaurants constructed at Kortrijk Xpo with their accolades. Meanwhile, for the Objects Category, visitors in the Xpo were able to attend an exhibition featuring the winners, including the Grand Prize winning, "Volumes, Patterns, Textures and Colors" by Dimitri Bähler.

While we were dazzled by the inventiveness throughout, a few elements really caught our eye, including the mesmerizing light fixtures of Lambert & Fils Studio's Laurent Collection - inspired by Bauhaus' Marianne Brandt's classic milk globe and featuring a dizzying array of the possible forms that the teaming of a globe and rod can take. Meanwhile, we were drawn to the furniture collection "wireS#" designed by Muller Van Severen for OFFICE Kersten Geers David Van Severen's SOLO HOUSES - crafted from an inox wire net; these pieces are intended for both indoors and out, distilling design down to basics while allowing users to customize each piece with various coverings. On the other end of the spectrum, Studio Dessuant Bone's "Perpetual Motion" interactive installation transformed windows and doors into movable sculptures utilizing Allaert Aluminium's high-end, low profile frame system, Otiima.

From Beau & Bien's "Rainy Day" light sculpture, to the MONOLITHOS series by Lorenzo Damiani for Luce di Carrara; and from Samy Rio's Vases Composés, to BIENNALE INTERIEUR Designer of the Year, Vincent Van Duysen's serene interior installation, here are the most scene-stealing...

Installation view of the GENERATIONS exhibition of highlights of design history from 1968 to today, selected by the curatorial team of INTERIEUR 2016 featuring works by designers and architects as Maarten Van Severen, Jean Nouvel, Ettore Sottsass, Andrea Branzi and Pieter De Bruyne a.o.

Delta Light presented the “Infinity of Light” installation at Kortrijk's Club Design. A black box that seemed to have crashed into this abandoned warehouse, getting stuck between the concrete pillars. Visitors of Club Design were invited to step into this asymmetrically positioned cube, floating half a meter above the floor at its lowest point.

Rethinking the concept of traditional luminaries KOVR's team has designed an all-in-one solution: high-quality panels with a fully integrated lighting system. HYDE has LED technology mounted inside the panels, fusing architectural elements and light in an invisible way where light seems to appear out of nowhere.

Johnston Marklee, in collaboration with Los Angeles designer Jonathan Olivares, have designed the interior installation “Room for a Day Bed” as part of “Silver Lining - Interiors” exhibition at the Biennale Interieur 2016 in Kortrijk, Belgium which has been curated by OFFICE Kersten Geers David Van Severen, in partnership with visual artist Richard Venlet and graphic designer Joris Kritis.

The Bow Chair by Taylor McKenzie-Veal (US), winner of Interieur Awards - Objects Category.

Public art by the renowned Belgian photographer Filip Dujardin at the area around the North Bridge in Kortrijk. Sequence n°1 is a permanent installation at the river Lys, which unites various archetypes of Belgian architecture.