On Note: Miniature Illustrations on Sheet Music by Lena Erlich 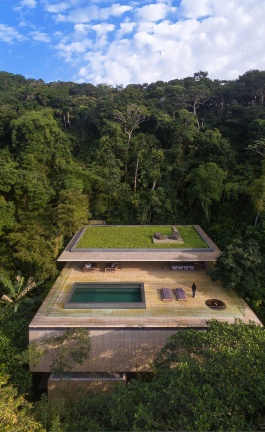 At Home In the Jungle: Casa na Mata by Studio MK27 in Guarujá

Calder in the Alps

Six large scale works created in the 1960s and 1970s by the late great artist, Alexander Calder, have made the stately gardens of Le Grand Bellevue and Alpina hotels in Gstaad, Switzerland, their home through to the end of March 2017. The outdoor exhibition, Calder in the Alps, which is being presented by the international gallery, Hauser & Wirth, in collaboration with the Calder Foundation, brings an air of the whimsical to the pastoral setting. This is the second part of the exhibition; the first began in mid-July 2016 in which one single standing mobile (3 Flèches Blanches) and five stabiles (A Two Faced Guy, Four Planes Escarpé, Six Planes Escarpé, Untitled, and Tripes) were displayed at Lauenensee, Kirche Saanen, on the Promenade and in the grounds of Le Grand Bellevue.

Both tongue-in-cheek and dramatic, Calder's sculptures always have more to say than what first meets the eye. This is only enhanced by the over scale size of these five monumental examples -the likes of which the artist concentrated on later in his career as commissions for these larger works came in from around the world - as beheld in the theatrical backdrop of the Swiss mountains.

Both tongue-in-cheek and dramatic, Calder's sculptures acquire a new sense of scale as they're set against the theatrical backdrop of the Swiss mountains.

Made with simple, industrial materials such as sheet metal, rods, bolts and paint, the sculptures are the perfect example of how fluidity and gracefulness can be created even with the toughest of ingredients... Indeed, all it takes is the artistic talent to bend them into telling a different story. With that in mind, it's not surprising how the interplay between these sculptures and their temporary environments is so balanced; for the environment imparts the sculptures with a dynamism only a living space can bring, whereas they offer the environment the cadence of their organic shapes, each of which possesses a modernity that transcends the era in which they were created.

The Alpine landscape imparts these monumental sculptures with a dynamism only a living space can bring.

Take for instance the mobile, 3 Flèches Blanches, which can be seen on the grounds of the Le Grand Bellevue Hotel. Although it was created in 1965, its elegant poise silently commands the attention of the imposing, gilded building in front of it. As with all of Calder's works, no superfluous elements have been added through which to tell its story, just the perfect balance that the artist always managed to bring with just a few, well-thought-out lines and geometric forms. There's genius in that.

Perhaps one of the artist's secrets however can be discerned in the composition of the displayed sculptures, Four Planes Escarpé and Six Planes Escarpé (1967) where the composition the lines created between the angular pieces comprising each sculpture, as well as the space between the two sculptures themselves, speak loudly. Negative space, it appears, can have a dramatic voice.