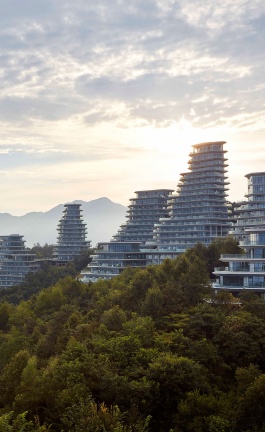 The Spiritual Symbiosis of Architecture and Nature in Huangshan Mountain Village

In graphic design, crafting the logo of a distinguished company is the profession’s Holy Grail, not just because of the ubiquitous visibility this entails, but also because of what is at stake: a logo should represent who the company is, embody its characteristics and summarize its identity, all in one single design gesture that should both fit in a business card and look good in a building’s façade. Nowhere is this more evident than in the outstanding work of American graphic designers Ivan Chermayeff and Tom Geismar, whose partnership, the longest running in the business as it celebrates its 60th anniversary in 2017, has left an indelible mark on the visual landscape of America.

Founded in 1957 in New York by Ivan Chermayeff and Tom Geismar, the company, which was renamed Chermayeff & Geismar & Haviv in 2013 - a nod to designer and partner Sagi Haviv who had joined ten years earlier - has been a pioneering force in American graphic design with some of the most iconic logos under its belt: NBC’s colourful peacock, National Geographic’s distinctive yellow frame, Mobil Oil’s eye-catching red O, PanAm’s pared-down globe and many more.

60 Years of Logos: Chermayeff and Geismar

Images and Special Thanks: Chermayeff and Geismar

This project is supported in part by an award from the National Endowment for the Arts. We thank them for their help towards the AIGA archives and special collections.

After a few years of designing record albums, company magazines and packaging lines, the watershed moment came in 1960 when David Rockefeller asked Chermayeff and Geismar to create a new logo for Chase Bank, then the second largest bank in America. Eschewing a figurative design as was historically customary, instead the designers drew an abstract, symbolic shape, both simple and memorable, which is still in use today. “You may not be able to draw it”, as Chermayeff has said, “but when you see it, you know you’ve seen it before.”

The company went on to design a plethora of emblematic visual identities for corporate, retail, media, institutional and public entities such as Merck Pharmaceuticals, Hearst, Armani Exchange, Barneys New York, Showtime, PBS, MOCA, MOMA, the Smithsonian Institute, Library of Congress and the Environmental Protection Agency, all of which have become an integral part of American culture. Their logos may seem simple, but as Geismar claims, they are the product of a painstaking “process of investigation, creativity and politics" whereby you try, according to Chermayeff, “to understand what your clients are, which is not necessarily what they say they are”.

Chermayeff & Geismar & Haviv has also been a prolific designer of posters, be they for museum exhibitions, television shows or other cultural events, but the company has also created large scale installations such as the murals for the Lisbon Aquarium and the iconic steel sculpture of a massive red 9 on West 57th Street in New York.

Apart from a brilliant graphic designer and illustrator, Chermayeff, who recently passed away on December 2nd, 2017 at the age of 85, was also a creative collage artist whose work has been widely exhibited in America, Europe and Japan. Made out of mailing envelopes, scraps of packaging, ticket stubs and other found materials that are assembled into whimsical faces and abstractions, his collages feature a colourful, modernist aesthetic that attest to his unerring sense of colour, form and visual connections as well as his innate wit.