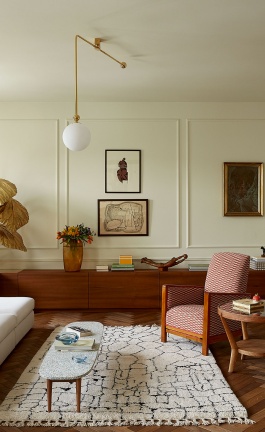 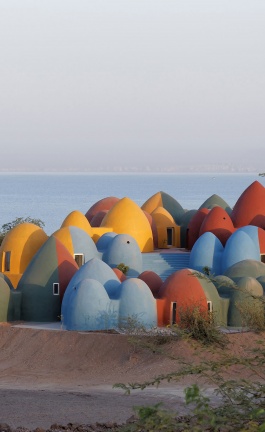 Zahrah Alghamdi, “What Lies Behind the Walls”. Photography by Lance Gerber.

With museums and galleries effectively closed for the past year, people are longing for cultural experiences that don’t involve the virtual stupor of smartphone and laptop screens but rather the hustle and bustle of physical exhibitions and the spontaneity of social interactions. While we’re still far from returning to pre-pandemic norms, there’s finally a number of in-person albeit socially-distanced exhibitions that are opening to the public such as Desert X 2021, the third instalment of the biennial exhibition that is taking place across California’s Coachella Valley. Curated by returning artistic director Neville Wakefield and César García-Alvarez, founder and artistic director of contemporary art platform The Mistake Room, the exhibition presents newly-commissioned projects by a roster of international artists addressing ecological, cultural, spiritual and socio-political themes through the prism of the desert. At its core, the exhibition, which runs until May 16, marries the local with the global, exploring the idea of the desert as a place where the voices and stories of the marginalised can be heard. Spanning over 60 kilometres, the setting of Desert X is an apt metaphor for our current quagmire; as desolate and arid as the desert appears, it conceals a treasure trove of stories, ideas and dreams that not only pose urgent questions but also envision the possibilities of a brighter future.

As expected, there’s no shortage of monumental installations – the sparse, bare-bones, as-far-as-the-eye-can-see landscape of the desert practically demands it. Inspired by desert journeys, from the Biblical exodus to the treks of immigrants from Central America searching for a better tomorrow in the US, Mexican artist Eduardo Sarabia has designed an immersive arrow tip-shaped maze that visitors can step into. Made from petates, traditional rugs woven from palm fibres, “The Passenger”, as the installation is titled, speaks to the challenges and aspirations involved in such journeys and pays tribute to the people who have embarked upon them.

Saudi artist Zahrah Alghamdi’s “What Lies Behind the Walls” takes the form of a monolithic, 7-metre-high wall that appears like a huge chunk of sedimentary rock. What on close inspection looks like compressed layers of turf, insulation and folded carpet, is in fact 6,000 tiles made from cements, soils and dyes specific to both Coachella Valley and the artist’s country. The resemblance to rock and soil strata, a geological record of the past, imbues the accumulated materials with a sense of history. In combination with the materials’ allusion to prayer rugs, Alghamdi poetically intertwines material and memory, positioning her cultural heritage as both a barricade and edifice, as well as connects the landscape of Coachella Valley with the world’s other deserts, drawing parallels with the local cultures that these places have given birth to.

Zahrah Alghamdi, “What Lies Behind the Walls”. Photography by Lance Gerber.

Just as illusory organic with Alghamdi’s work and grand in scale is Ghanaian artist Serge Attukwei Clottey’s “The Wishing Well”, a pair of monumental cubes which are draped with a textile made from small, square pieces of bright yellow plastic laboriously wired together by hand. Sourced from plastic water containers known as Kufuor gallons, which Europeans introduced to the people of Ghana to transport cooking oil, Clottey’s choice of material speaks to histories of colonial pillaging and its effects on trade and migration. Besides from being repurposed relics of colonialism, the plastic containers also draw attention to the issue of environmental justice as they reference all those people around the world who trek on a daily basis to collect water from distant wells – a grim reality that the installation takes its title from. Standing on a grassy clearing, the stern, cubic forms point to the industrialization that has exacerbated water shortages, while the bright yellow colour proclaims exactly how urgent the issue really is.

Also set in a grassy clearing is New York-based Egyptian artist Ghada Amer’s “Women’s Qualities”, which takes the form of a manicured garden. Arranged in a circle – a symbolic shape that feminist artists have embraced in juxtaposition to the phallic symbols that male creatives have subliminally popularized in art and architecture – a series of letter-shaped planters spell adjectives that supposedly describe feminine qualities. Amer has wittily paired these adjectives with specific plants, for example “resilient” is packed with barrel cactus while “nurturing” sports fragrant sage, in order to question the universality of gender stereotypes, as well as conjure a form of self-portraiture in an act of looking both inwards and outwards.

Words also play a pivotal role in “Never Forget”, Alaskan Tlingit and Unangax artist Nicholas Galanin’s work which seeks to redress the appropriation of the land of Indigenous communities. Set in the foothills near the Palm Springs Visitors Center, the 13-metre-wide “INDIAN LAND” sign references the iconic HOLLYWOOD sign which was initially constructed as a promotion for a whites-only development. To add insult to injury, the colonization of the ancestral Cahuilla territory was subsequently followed by the misappropriation of Indigenous visual culture by Hollywood’s depiction of the West through the lens of white settler mythology. Galanin’s work is thus a distress call against collective amnesia as well as an appeal to settler landowners to transfer land titles and management back to local Indigenous communities.

Quite smaller in scale and humbler in sensibility, “Jackrabbit Homestead” by Californian artist, writer and desert anthropologist Kim Stringfellow is a 12-square-metre wooden cabin. The miniature cabin exemplifies a vernacular typology that proliferated in the middle of the 20th century in response to a 1938 law that made the desert accessible to a new demographic of land owners. Taken out of its remote context and placed between the Palm Desert Chamber of Commerce and a CVS Pharmacy, Stringfellow’s 1950s proletariat home sparks conversations about class, sustainability, capitalism, and public land.

Similarly to Galanin’s appropriation of commercial signage, New York-based artist Xaviera Simmons has taken over a series of billboards along a road connecting Palm Springs and the Interstate 10 in order to address Black reparations and the redistribution of wealth. Boldly titled “Because You Know Ultimately We Will Band a Militia”, Simmon’s wittily combines confrontational text and images to assert the prerogative of oppressed groups like the First Nations people and black descendants of slavery to self-define as well as demand the respect they deserve and the material resources they are owed. By co-opting the visual language of consumption, the artist imbues her counter narratives with confidence, determination and aspirational urgency.

Last but not least, Berlin-based artist Alicja Kwade’s “ParaPivot (sempiternal clouds)” takes the form of a set of interlocking steel frames that support two large blocks of white marble that seem to be held in place as if by magic. The installation’s illusion of instability is enhanced as visitors move in, out of, and around the frames to witness the “levitating” blocks constantly being rearranged in new, impossible compositions that call into question the systems designed to make sense of an otherwise unfathomable universe. Part of a series of site-specific sculptures that reflects on time, perception and scientific inquiry, Kwade’s work also embodies the experience of the desert itself, and its apparent emptiness belying dense layers of meaning. In fact, “as much as the desert is a state of place, it is also a state of mind” as artistic director Neville Wakefield says, an assumption that all of the artists featured at Desert X 2021 seem to wholeheartedly embrace.

Xaviera Simmons, “Because You Know Ultimately We Will Band a Militia”. Photography by Lance Gerber.