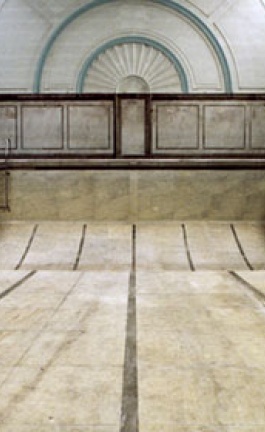 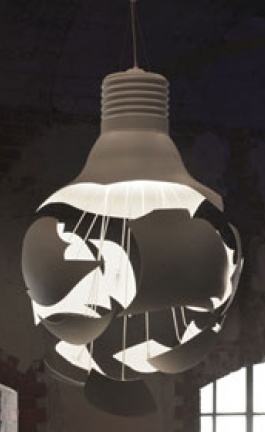 The most spectacular cinema in Poland - Multikino Zlote Tarasy – is opening in Warsaw.
The cinema is owned by the Multikino company (ITI Group) – one of the major Polish multiplex operators. Multikino, located in the Zlote Tarasy commercial centre, is a premiere cinema with an auditorium seating 777 and the largest screen in Poland. It is a unique place, both in terms of the design and technical solutions. All halls are equipped with state-of-the-art projection equipment and the “Martin Audio” sound system, made by one of the world’s leading sound system manufacturers.
The premiere hall is equipped with “Christie”, a world-class digital projector which ensures perfect image quality.
Multikino has invited Robert Majkut, one of the leading Polish designers to co-operate on the interior design.
The concept that motivated the designer while looking for inspirations for his design was to create a unique and extraordinary place, one that would bring high-quality life and entertainment to the city centre. The place is expected to redevelop the magic of the cinema, and to become an appropriate and admirable setting for contemporary film art.
The uniqueness of the design is also demonstrated by the fact that it is a total design. It encompasses both a detailed interior design and an entire visual identification design for the complex, including the design of a special logo for Multikino ZΕÂote Tarasy, cinema guides, popcorn boxes and other graphical elements.
The bold and innovative interior design undeniably distinguishes the complex from existing multiplexes.   The facility was designed as a combination of two styles: modern forms and shapes with a decorative and slightly archaising ornamentation. It alludes to the patterned Renaissance and Baroque fabrics, old-school wallpapers, tattoo aesthetics and tendencies seen in modern, avant-garde publishing design.
The multi-storey interior adds functionality to the development, which will meet the needs of various groups of cinema-goers. A unique premiere hall, seven other auditoria, a VIP zone and a music club – all of them open new opportunities for organising film, music, sports and business events. Visitors are offered a multitude of films, a comfortable and friendly interior, cosy atmosphere, and yet spaciousness, which provides the entire facility with panache and determines its matchless atmosphere.
Having passed the dreamlike entrance – the box office lobby is the place of first impression. It is spectacular, yet friendly and appealing, extending an invitation to visit, and at the same time being the essence of Multikino ZΕÂote Tarasy. The place, designed as a combination of styles, is a passport to the world of film issued by Robert Majkut Design. The extraordinary design of the box office, surrounded by static and moving images with variable geometries and on a cathedral-like scale, reflects the flamboyance and uniqueness of the place. Rounded and modern shapes have been used, which makes forms look like separate bodies, yet inextricably attached to the entire interior. Everything follows a dark, theatrical colour scheme. A large number of box offices, an interactive information system, and smooth traffic control at the box offices, are expected to ensure an even greater convenience for cinema-goers.

Having passed a ‘floating’ tunnel, the visitor enters the main hall. Entrances to auditoria are located here, including the Premiere Hall. There are two bars, sofas and tables with seats. The spaciousness of the place is highlighted by a stunning Warsaw panorama seen through an enormous, three-storey window. The purple, black and red colour scheme used in this space, which is characteristic of the entire development, combined with individually designed LED lighting elements, create an unusual impression. Alternating matt and shiny surfaces, the size and the flamboyance of the space, make it a perfect place for film premieres and events, as aside from seven auditoria, the visitors also have the Premiere Hall, VIP zone and a top-floor club at their disposal.
The Premiere Hall has an air of splendid theatre and opera auditoria. It features numerous decorative elements, ornaments, and wall lighting details. For convenience, special comfortable seats have been placed in the hall, upholstered with cosy fabrics, and in the VIP-zone they are covered with genuine purple leather. The entire hall, although very modern, alludes by its colour scheme to the tradition of grand theatre and opera auditoria, which is exemplified by an impressive six-metre chandelier made using a state-of-the-art LED technology.
Both in the upper part of the Premiere Hall and in the first storey connected to the Premiere Hall, there is a VIP-zone called the ‘Velvet Bar’. It includes a distinctive long bar and a separate stage – to be used both for music performances and as a separate bay with mobile seats. For a total convenience, the VIP zone has its own cloakroom and toilets, which are also arranged in a luxury and unconventional style.  The monochromatic black and purple interior, walls covered in a quilted plush fabric, mirrors, black stone, and spectacular lighting determine the extraordinary, luxury and stylish climate of the place, which is designed in a special way and takes the reception of film art to the highest global standards. This place aspires to be a meeting venue not just for sophisticated film lovers, but also for the creators and participants of film art.
The top level, with a bar and 4 auditoria, is the so-called “35 mm” music club, with a separate DJ booth, a bar and a restaurant zone. It is a place to rest, relax or organise invitation-only events. Its design is different than that of the whole complex. It is strongly illuminated by a giant window and a huge oval skylight in the ceiling. It surrenders to sunlight with its light-coloured, almost white decor, white furniture, sofas and armchairs. This place is special in its dissimilarity to the remaining part of the design, being in opposition to it - a fresh breath. Owing to its functional identity and rearrangement possibilities, it is a perfect place to hold private events, meetings, or – in combination with the auditoria – reviews, private showings, or film marathons.
In addition, Multikino Zlote Tarasy has its own new logo. This mark has been created alluding to the symbols of the cinema – light, illumination, movement, illusion, and to the well-known film symbols, such as Batman or Superman. It is modern but still related to the aesthetics of the existing Multikino logo. The new logo may coexist with the old logo, enhance it and enrich it. It also refers to the aesthetics of the whole complex. Its form is closed and compact. It is dynamic and expressive, and its colour scheme refers to the convention of the facility and to the identification of the cinema.
Although developed three years ago, the design of Multikino Zlote Tarasy implemented today sets new standards in the Polish market of entertainment services.
It constitutes a non-traditional approach to the issue of the role of design in the shaping of mass culture facilities. In the shaping of amazing, inspiring, yet addictive places. And perhaps this is what the “magic of cinema” is all about – the “golden” cinema in particular.

Robert Majkut about the design:
“It was a challenge to create a complex which would be the sign of our times. Warsaw is still developing. Polish people are becoming richer and richer, they want to have better, more noble lives and to enjoy them to the full. To have a variety of choices, also in entertainment, culture and arts. Therefore we need unique, ambitious and extraordinary places, which reflect the character of the city, which create its identity and ensure world-class entertainment, pleasant and user-friendly, meeting the inspirations of participating in the world.
The design is an attempt to create such a space, and to look for suitable aesthetics for such a facility. By upgrading the standard, alluding to the celebrations of the film world, by placing innovativeness, uniqueness and nobility in the focus, I tried to re-introduce nobility to what had been impoverished – combine the convenience of a multiplex with the atmosphere and dignity that we know from cosy cinemas or grand theatres and concert halls. No one builds such cinemas now, but I truly believe that it makes a lot of sense, as we again want to live in a better reality, richer in formal terms, and of very good quality.
My inspiration is interactive architecture, the interpenetration of the outer and inner worlds, the interaction between the environment and the user, changes driven by light, colour vibrations and balancing on the edge of the unknown. All of that is incorporated in this extraordinary design. I would like the magic of the cinema to revive.”

see the short video at design.pl.